You are here: Home > Convention & Trade Show > Jay Adrick
Welcome, guest: Login to your account
no 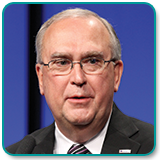 A 50-year veteran of the broadcast industry, Adrick retired from Harris Broadcast in 2013 and started an independent consulting practice.

He also rejoined his former company now known as GatesAir on a part time basis as a technology advisor. He is a former member of the board of directors and Vice Chairman of the Advanced Television Systems Committee (ATSC). He currently serves as the Chairman of the ATSC Mobile Emergency Alerting System Integration Team (M-EAS I-Team). He also chaired the Open Mobile Video Coalition Forum and served on both of the FCC Media Security and Recovery Councils.

He is a founder and former General Manager of NPR member station WVXU-FM.

While at Harris Broadcast, he headed the broadcast systems business and later developed broadcast technologies and applications that resulted in three U.S. patents.

« Back to the Convention & Trade Show Calendar