This summer’s TAB Board elections yielded a new slate of officers and a handful of new Radio and TV directors which were announced at the Annual Business Meeting Aug. 2 at the 2018 TAB Show. They round out a panel of 37 Texas broadcasters elected by the membership who provide fiduciary and 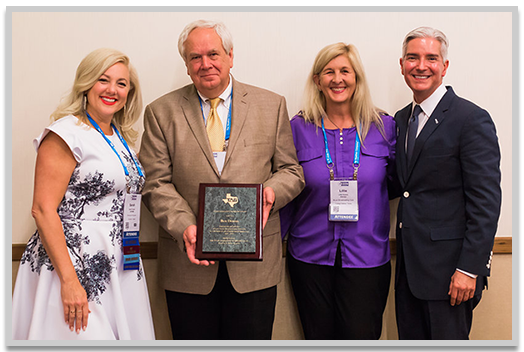 programmatic oversight for the organization.

New TAB Board Chair Sarah Frazier, Entercom Houston, also paid tribute to outgoing Past Chairman Ben Downs of Bryan Broadcasting, the only person to serve two full terms as TAB Board chairman who was also concluding a total of 18 years as either a director or an officer, with just one year’s break since first being elected in 1999.

“There’s not a single TAB program, service or legislative initiative during the past 19 years that Ben hasn’t been deeply involved in,” Frazier said to a standing ovation.

“He’s an advocate of the top order. He took an early lead with TAB on AM revitalization, played a key role in developing the State EAS Plan, was a key witness for our successful efforts to protect against record label shenanigans at the state level and secure a sales tax exemption for Radio stations’ digital transmission equipment.

Noting that Downs “works at a level far above most of us on the Board,” Frazier reflected on his close working relationships with FCC commissioners and bureau chiefs, as well as his members of Congress and the Texas Legislature.

“A perfect example is how Congressman Flores in his district was able to work with Ben to make sure that the $1 billion boost to the Spectrum Repack Fund included FM stations and translators.”

Downs, accompanied as usual by his wife and “advisor” Lillie, was honored as TAB’s Broadcaster of the Year in 2010, and served on the NAB Radio Board from 2008 to 2014.

Also exiting the Board was Jerry Martin of KPRC-TV in Houston who was term-limited after serving two consecutive three-year terms. Martin was lauded for his leadership on the Legislative Policy Committee which he chaired for the last two years, as well as several stints on the PEP and Convention Planning Committees.

Board seats are allocated according to TV and Radio market size, with at least one seat in each category coming up for election each year. Five officers advance one position each year with TV and Radio alternating in the new open seat, all subject to the membership’s approval.

This year’s results are listed below. The 2019 election process begins in early June.