As 2018 comes to a close, we at TAB are reminded of the significant impact that local broadcasters can have on the communities in which they live and serve.  And it’s not just with station broadcasts.  We often take on leadership roles in community organizations and causes.

Our service is marked by an investment of long hours, and often, great personal sacrifice year after year, to be a resource to a community.  This past Sunday, a wonderful example of a local broadcaster who dedicated himself to a lifetime of community service, passed away in Colorado City.  Jim Baum, 82, owner and operator of KAUM-FM and KVMC-AM, died after a brief battle with leukemia.

Baum had fought cancer before and kept plugging away at what he loved – serving the citizens of Colorado City with a mix of local news, wry observations, history, music and mirth.  Although KVMC signed on in 1950 as “the Voice of Mitchell County,” most folks in that area will tell you Baum was THE voice of Mitchell Co.  Baum was always quick to point out that he didn’t do it alone – his wife Linda and a small group of like-minded souls all worked at the station to make it happen.

In addition to his work in broadcasting, Baum served many years as Mayor of Colorado City, and authored three books, one of which is a collection of Mitchell Co. history and trivia.  He got into broadcasting after a minor league baseball career came to an end.  After working at stations in Abilene, Midland and Big Spring, he achieved a personal goal of owning his own station when he purchased KVMC in the early 1980’s.  Baum added KAUM-FM after a few years to “double the fun.”

Baum’s dedication to keeping the community informed and entertained was extraordinary, whether it meant staying on the air well into the night to bring word of area wildfires in 2011, or dodging a tornado in 2004 to keep citizens up to date when bad weather rolled through the area.

A quick scroll through the outpouring of tributes on the KVMC/KAUM Facebook page demonstrates the impact his nearly 40 years of service in Mitchell Co. had on the community.  “There are certain voices, smells, and sights that remind me of a place I call home and a place I feel safe, secure and loved.  “Life has not always been grand and I have traveled far away, but there is voice I know I could tune into and it would take me back to the love of my grandparents’ living room.  “That voice was Jim’s,” said Steeley Upshaw.

“What a fabulous man who kept everyone alerted with weather and so many things in Colorado City – not to mention playing fabulous music,” said Tina Bostic.  “Most, if not all, of the Mitchell County history I know came from years of listening to Jim’s Community Close Up program and reading Jim’s books.  “He has responsibly brought this area local news for as long as I can remember,” said Jody Dockrey Chaney.

Those comments are indicative of a being a force for good through a career in broadcasting. 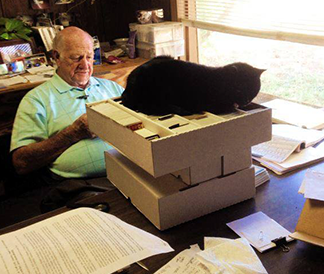 Bailey Latest Addition to Notable Retirements
In Texas, there is no shortage of broadcasters who this year are leaving behind wonderful legacies of service.  Rick Bailey, General Manager of AM daytimer KHBR Hillsboro, is retiring next week after a 50-year career.

Earlier this year TAB noted the retirements of KHOU-TV Houston General Manager Susan McEldoon, TAB’s 2018 Broadcaster of the Year, and KIII-TV General Manager Dan Robbins, both of whom have multi-decade careers in broadcasting marked by involvement in their communities.

All five distinguished broadcast leaders leave legacies of goodwill in the community because of their unselfish efforts to be of service.  And there are many other broadcasters across the state who also have had a great impact on their communities.  It is privilege and honor to be of service.  May we all leave behind a positive and uplifting legacy this year and in 2019.