Joe Richardson grew up in the small town of Santa Rosa and as many young men do, took to the road after high school graduation and headed out to West Texas, working in a generator plant. That sparked his interest in electronics. Upon returning to the Rio Grande Valley, he enrolled in an electronics school in 1956.

Richardson began his career with KRGV in 1961 working at the old transmitter site for KRGV Radio. His stay there lasted until 1976 when he was offered the position of Chief Engineer of KRGV Radio. 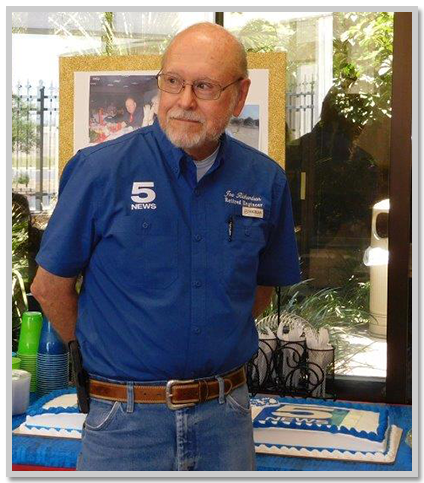 Since the radio and TV studios were in the same building, Richardson got to know the TV staff very well, and was happy to help them out from time to time.When the radio and TV divisions of KRGV split up in 1980, Richardson decided his best course for the future was to stay with the TV side.

As it turned out, that was a good choice! The Manship Family sold the radio station a few years later but KRGV-TV still remains under the family ownership.

Richardson continued his service as a studio and remote broadcast engineer until 1997, when the position of Transmitter Supervisor became available. Because of his extensive knowledge and experience with RF and transmitters, he was the first choice for that job. He kept the aging RCA transmitters and associated equipment running until 2003 when the digital conversion was completed.

Richardson was closely involved with the development of the new DTV transmitter facility, working with contractors on the construction of the building, antenna and feedline rigging and testing, and the installation of the new Harris Platinum transmitters, for analog as well as digital transmission.

The resulting facility, and the care he put into maintaining it, has received many compliments from colleagues as well as inspectors from the FCC and TAB.

After conducting an inspection on behalf of TAB’s ABIP program, longtime inspector Dick Pickens, remarked: "The KRGV transmitter site was the finest [he] had ever seen in his entire career!"

Another promotion was on the way a few years later. When the Assistant Chief Engineer's job opened up in 2006, Richardson was again an easy choice. In addition to his technical responsibility, he took over administrative duties, coordinating personnel schedules and studio maintenance.

And, of course, Richardson brought his strong work ethic and careful attention to detail to this effort, maintaining the same high standards for another 12 years, until his well-deserved retirement on May 18, 2018.

Joe Richardson's tenure of 57 years would be rare in any job, but especially in the high-stress broadcasting industry.

And in the minds of all who have ever worked in that business, and particularly those who worked with him at KRGV, Joe Richardson will always be remembered as a "Broadcast Legend.”

Thanks to the staff of KRGV-TV for the writeup and photo.