You are here: Home > Convention & Trade Show > Terry London
Welcome, guest: Login to your account
no 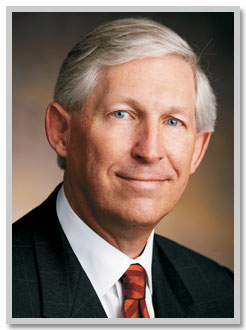 2011 Broadcaster of the Year

TAB’s Broadcaster of the Year formed his company in 2007 with the vision to acquire or create multiple media and entertainment companies all within the state of Texas.

In less than four years, Terry has done exactly that…and much more.

Born in Stillwater, Okla., he grew up in Oklahoma and North Texas.

London graduated from Oklahoma State University with a BS in Mathematics in 1971.

From 1973-1978, London worked at the Oklahoma City office of KPMG, focusing on media, manufacturing and banking companies.
In 1978, he began his 23-year career with the Gaylord family.

Gaylord Entertainment, based in Nashville, was created as a diversified media and entertainment company.

The company had ownership or interests in such properties as TNN: The Nashville Network, CMT: Country Music Television, the world famous Grand Ole Opry, the Gaylord Hotels, the Opryland Theme Park, as well as several major market television stations (including KTVT Dallas-Fort Worth and KHTV Houston), radio stations, movie and television production companies.

London started as controller of The Oklahoma Publishing Company, became CFO of Gaylord Entertainment in 1991 at the date of the initial public offering, executive vice president in 1996 and president & CEO in 1997.

That same year, Gaylord Entertainment sold TNN and CMT to Viacom for $1.6 billion.

He left Gaylord in 2000, ready to build a business of his own.

London said he focused on Texas because living in Dallas, he wanted to either drive or fly no longer than an hour and half from his home.
But more importantly, he recognized that Texas was the fastest growing state in the South with 19 DMAs.

There was an opportunity to build a station group and never leave the state.

London saw Texas as ripe for a broadcasting group dedicated to serving local communities and building on music, fishing and hunting.
Having grown up in a small community, London had a real appreciation and respect for small and medium markets.

“The future belongs to those who serve the local communities and are willing to be creative and adaptive. There is no better way to reach our communities than local television,” London said.

“Terry has made it possible to still develop a company that maintains real honest work values and where it is still ‘fun’ to come to work,” said longtime Texas broadcaster Phil Hurley, who joined London in 2008 as chief operating officer.

London encourages future broadcasters to be committed to their communities and employees while always looking for better ways to entertain and inform.

He is always willing to take a chance and embrace technological advances.

Many of London’s employees describe him as a truly humble person who genuinely cares about people.

“Terry London has made a difference in all of the media and entertainment companies he guides,” said Gayle Kiger, general manager of KCEN-TV/KAGS Waco.

“His attitude shows in London Broadcasting’s statements, including words like, Sincere…Caring…Real…Bold…and Excellent,” Kiger said.
London continues to diversify with 41 Entertainment, a film and TV production company, as well as Troubadour Texas, a 22-episode docu-reality TV series following the lives of singers and songwriters chasing their dreams.

London Broadcasting has co-sponsored TAB’s Legislative Day for the past two years and he believes it is important for all his station managers to participate in the association.

“No one can do it alone. A strong TAB will only strengthen all broadcasters.”

He has served on the boards of the Texas Rangers, Cencom Cable (now part of Charter Communications), Bass Pro Shops, Pier 1 Imports and Johnson Outdoors, Inc.

He also has served on numerous civic and industry boards including the Country Music Association, the Nashville Chamber of Commerce, Vanderbilt Children’s Hospital, the American Diabetes Association and the BellSouth Senior Golf Classic at Opryland.

Terry London’s stations will continue to grow and evolve and make a positive difference in the communities they serve and the great state of Texas.

The motto London chose for his company embodies the spirit of TAB’s Broadcaster of the Year Award – “London Broadcasting…Texas born…Texas proud…We are Texas.”