1996 Broadcaster of the Year Award 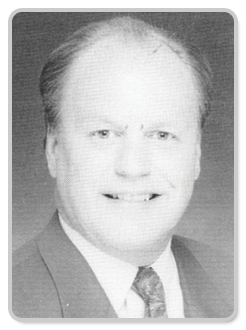 Steve Hicks did not intend to make his career in broadcasting or even dream of making radio history when he took a part-time job as a board operator at his father's Beaumont radio station.

By the time he graduated from the University of Texas in 1972, however, Steve Hicks had the broadcasting bug.

He returned to Beaumont, worked in the news, sales, accounting and programming departments at KBPO and KLVI and at age 29 bought out his dad.

In 1979 he co-founded Hicks Communications, Inc. and began acquiring stations in Dallas and Austin, Tulsa Okla. and Baton Rouge, La.

Plummeting oil prices in 1986 sent Texas into a tailspin that quickly impacted broadcasters.

Hicks was forced to sell off many of his properties and let his Austin station go back to the bank. In the middle of these eco­ nomic difficulties, Hicks came up with the idea of local management agreements (LMA's) on an airplane after a meeting with his brother, Tom, who heads Hicks, Muse, Tate & Furst, Inc.

The Dallas-based investment company had just bought Dr. Pepper and 7-Up bottling companies and worked out a management structure to eliminate duplicate expenses.

In Jackson, Miss., Hicks applied the same idea to radio, arranging for one management team to run two separate stations.

The idea changed 66-year-old federal regulations and created a way around ownership restrictions to permit stations to share management and reduce costs.

The Federal Communications Commission sided with Hicks in 1992 and the arrangement quickly was copied across the country to allow unprofitable radio stations to get back into the black.

LMAs, now known as "Duopolies," spread to television as well and ultimately played a role in persuading the Congress to eliminate most ownership restrictions in the Telecommunications Act of 1996.

At the height of this unparalleled success, Hicks announced his departure from SFX in a $20 million buyout deal.

SFX moved its headquarters to New York but Hicks chose to remain in his native state.

His only regret, Hicks said, was ending his SFX association with "450 of the radio industry 's most outstanding employees."

Using his long-time management team and his Beaumont stations - KLVI and KYKR - as the flagships, Hicks formed GulfStar Communications in 1992.

Characteristically, Hicks turned around, almost immediately, and began a new venture with $ I 00 million in backing from Hicks Muse to start a new radio investment group, Capstar Broadcasting Partners.

To date, Capstar has contracted to acquire more than 50 middle market radio stations throughout the U.S.

Hicks, however, had an idea for a new kind of country embracing all the modern elements of programming like big personalities that were being done on Adult Contemporary and Contemporary Hit formats but had not reached Country.

WSIX since has won "Radio Station of the Year" nine times from the Academy of Country Music.

Radio Ink named Hicks one of the 40 Most Powerful People in Radio.

He is a former President of the Sabine Area Advertising Federation and currently serves as Chairman of the Young Presidents Organization, Central Texas Chapter.

Hicks and his wife, Donna, reside in Austin.