You are here: Home > Convention & Trade Show > Robert Musburger
Welcome, guest: Login to your account
no 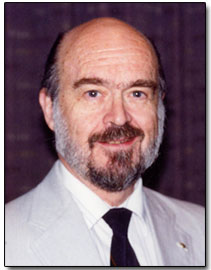 The Texas Association of Broadcasters' Educator of the Year Award is only presented in special circumstances.

The award has only been presented once – in 2002 to Dr. Robert Eubanks, former chair of the RTF Department at Sam Houston State University.

This year, TAB is presenting the second award to another outstanding, and now retired, Texas broadcast educator. Coincidentally, it's another "Dr. Bob" – Dr. Robert Musburger.

Growing up in Montana, Musburger always knew he'd be a broadcaster – even if his career got off to a bit of a rocky start. In high school, Musburger and his brother became involved with an illegal radio station in Missoula, Montana. The station's popularity grew and the boys were even able to sell airtime! This garnered some unwanted attention from the Federal Communications Commission. The boys were warned that they'd be fined $10,000 each if they didn't shut down the station.

After graduating from high school, Musburger enrolled in the University of Montana, majoring in math and chemistry.

During his first year of college, he received a job offer from the owner of a local radio station needing help building the town's first television station.

After his stint at the TV station, Musburger left college to get an associate's degree in electronics at what was then Central Technical Institute in Kansas City. He also accepted a job at WDAF-TV Kansas City. After graduation, Musburger worked his way up at the station – eventually becoming production manager. He produced everything from children's and news shows, to documentaries and commercials, even winning an Emmy for one of his children's shows.

Deciding to focus on production, Musburger headed to the University of Kansas City to earn a liberal arts degree.

He majored in speech and theater, minored in journalism and helped build the university's radio station.

He earned his master's degree in cinematography from the University of Kansas and his doctorate degree in telecommunications from Florida State University.

Musburger and his wife Pat moved to Texas in 1983 to accept a teaching position at the University of Houston.

During his 20 years at the university, he served as the head of the RTV department, as well as director of the School of Communication. In 1996, the Texas Association of Broadcast Educators elected Musburger as their representative to the TAB Board of Directors.

Musburger would continue in the seat until 2002 – serving as a link between professional broadcasters and educators.

He served on numerous other boards including the Society of Motion Pictures and Television Engineers and the Association for Community Television in Houston.

"I began teaching to help students better understand how communication works in the real world, and I can do that best by remaining part of the industry and interacting with students in the classroom," he said.

"Bob taught students how the communications industry actually works in the real world. Even as technology changed, Bob was always been right there with it – ready to adapt to new procedures and equipment," said TAB Executive Director Ann Arnold. "His commitment and high standards are still appreciated by Texas broadcasters."

Musburger retired from UH in 2003 after nearly 50 years in the business. He and Pat relocated to Seattle, where he continues to serve as a media consultant.

Texas broadcasters salute Dr. Robert Musburger for his years of inspired teaching and mentoring, as well as his efforts to bring broadcasters and educators together to forge relationships that will contribute to the increased vitality of the Texas broadcast industry for many years to come.