You are here: Home > Convention & Trade Show > Robert Eubanks
Welcome, guest: Login to your account
no 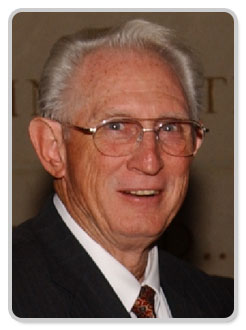 In selecting Dr. Robert Eubanks as the recipient of TAB’s Outstanding Educator of the Year Award, Texas broadcasters pay tribute to a beloved, semi-retired educator whose influence on several generations of broadcasters in Texas has been nothing short of profound.

“Dr. Bob’s” former students can be found throughout the state and nation, and his career is marked by his efforts to bring academia and broadcasters together to design the best curricula to serve the needs of the industry.

Eubanks was born Oct. 10, 1933 in Atkins, Ark. to Ed and Dean Eubanks, but his parents divorced only a few years after he was born.

His mother worked in a cotton mill and as an airplane mechanic in California during WWII. His interest in broadcasting began in California when he acquired his first small radio, listening to anything he could receive. Favorites included Tom Mix, Mr. District Attorney, Inner Sanctum, Life of Reilly and The Great Gildersleeve.

He made his first appearance on the air at 16 years of age, as part of a high school vocal quartet’s performance on an Oakland radio station, and later cut commercials with the same group. After graduating from Central Union High School in Fresno in 1951, he attended Harding University, a religious school located in Searcy, Ark.

At Harding, Eubanks pursued a dual degree in speech communication and Bible studies. He worked several jobs to make ends meet, including early mornings at a local radio station, KWCB-AM. The job included everything from sweeping floors to flipping the switch to put the station on the air.

After graduation, Eubanks served as a Church of Christ minister for several years in Arkansas and Texas, but continued doing religious shows and commercials for local radio stations. In 1957, he went to the University of Arkansas to pursue a Masters in speech communication and worked as program director at the campus radio station.

“I wanted to be able to teach and I thought that broadcasting held the greatest potential for good in our society,” said Eubanks. In 1967, he joined Harding as an assistant professor to teach communications courses and later entered the doctorate program at Pennsylvania State University. While pursuing his doctorate, Eubanks was the assistant general manager of the campus radio station, WDFM (now WPSU-FM).

By the mid 1970’s, he became a professor at Sam Houston State University in Huntsville. From the very beginning at SHSU, “Dr. Bob” preached the gospel of getting station experience as quickly as possible to his students. He encouraged them to get a full liberal arts education, not just “trade school” courses in broadcasting.

During a church service in Huntsville in 1975, he met his wife, Erika, a native of Germany whose first husband had died and left her with two children. Eubanks became involved with TAB at that same time. He set up the first student/broadcaster workshops at TAB’s annual convention to give students first-hand knowledge of how the industry operated. These dialogues also helped educators develop curricula that better suited the needs of the industry.

Eubanks was instrumental in establishing the broadcaster award given out annually by the Texas Association of Broadcast Educators. Eubanks served as TABE’s president three times and as the educational representative to the TAB Board of Directors for nine years.

Ultimately he became chair of SHSU’s Division of Public Communication and Program Coordinator in Radio/Television/Film.

In doing so, he helped build a small program into one of distinction in the state. In 1982, a fire destroyed the communication department’s classes, offices and TV equipment housed in the Old Main building. Dr. Eubanks lost his books and his papers.

His students remember that Eubanks showed visible relief that none of his students was inside at the time of the fire. “Hugs were had all around that day,” recalls former student Howard Esse, now a photojournalist at KRIV-TV Houston.

Fortunately, the fire spared the campus radio station and cable channel because they were housed in another building. Texas stations donated used equipment and the RTF program was soon back up and running.

Eubanks led the way to rebuilding the department and enlisted the help of broadcasters in planning new facilities that would offer the optimum environment to instill in students the qualities they would need to succeed in the broadcast industry. Today the department is housed in the Dan Rather Communications Building, which Eubanks struggled to build.

He retired from SHSU in 1994 and in tribute to him, the main control and production facility for the student-run Cable Channel 7 is named the Robert Eubanks Studio. Eubanks’ work to forge a real working relationship between educators and broadcasters is just one of his legacies. His former students are the other.

“Throughout my career I have not met another professor who has given so much on behalf of the future employees of the broadcast industry,” said TAB Past President Ray Alexander of KRGV-TV Weslaco.

These days “Dr. Bob” and Erika live in Colorado to be closer to their grandchildren. The couple also has a small cabin on a lake in Northern California, but Eubanks won’t disclose the location because “the fishing’s too good.”

Dr. Eubanks passed away in October 2018 at his home in Colorado.