You are here: Home > Convention & Trade Show > Perry Sook
Welcome, guest: Login to your account
no 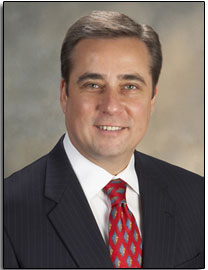 Broadcaster of the Year

The Texas Association of Broadcasters' 2006 Broadcaster of the Year has been an industry innovator since he began his career more than 25 years ago.

Perry A. Sook, President and Chief Executive Officer of Nexstar Broadcasting Group, has worked in all facets of the business – from radio sales and on-air talent to television news, sales, management and ownership.

During the past year, Sook broke new ground for the television industry after winning a protracted standoff with cable operators to secure meaningful monetary compensation for Nexstar stations' local broadcast programming.

The stations asked that they be monetarily compensated on a per-subscriber basis for the carriage of their signals, just as they are by other distribution systems such as direct broadcast satellite. The cable systems refused and on January 1, 2005, the stations were removed from cable systems in those markets.

For most of 2005, this was a high-profile fight as Sook and his stations stood up for all over-the-air broadcasters who drive the vast majority of viewers to cable television but receive no compensation – not even that of the lowest rated cable network.

Through intense negotiations and a willingness to incur short-term pain for long-term gain, Nexstar reached multi-year retransmission consent agreements with approximately 150 content distributors in the 27 markets in which the company broadcasts. Nexstar now has national agreements with direct broadcast satellite providers, cable companies, secondary cable providers and wireless cable providers in its markets. This was achieved when many in the industry doubted the prospects for success.

Sook's dogged determination in this battle and ultimate success is now compelling other broadcasters to follow this path. Besides the landmark cable battle, Sook has developed the model for operating multiple television stations in medium and small markets.

Working with partner company Mission Broadcasting, his stations have been able to provide more local news, weather and local sports than any preceding owner or group.

Sook's dedication to the industry and public service is evident in his company's sponsorship of TAB legislative events and his encouragement of local station executives' active participation in TAB lobbying initiatives and leadership efforts.

Prior to founding Nexstar, Sook was one of the principals of Superior Communication Group, Inc., which owned television stations in Oklahoma and Kentucky. The company was sold in 1995 to Sinclair Broadcast Group.

Before Superior, Sook was President/CEO of Seaway Communication., owner of stations in Maine and Wisconsin. Prior to that, he worked at KXTX-TV and KTVT-TV in Dallas, with Cox Broadcasting in Pittsburgh, and with Telerep as a national account executive.

Early in his career, Sook worked at stations in West Virginia, Florida, Ohio and Pennsylvania. Sook did his undergraduate work at Ohio University and was an adjunct professor at Edinboro State University of Pennsylvania. He is a recipient of the NAB/BEA Harold E. Follow Memorial Scholarship.

Sook is a member of the Board of Directors of Penton Media, Inc., the Television Bureau of Advertising, and is a Board member and trustee of the Ohio University Foundation. He and his wife Sandra have three children; Laura, Victoria and Perry, Jr. The family resides in Southlake, Texas.