You are here: Home > Convention & Trade Show > Rusty Reynolds
Welcome, guest: Login to your account
no 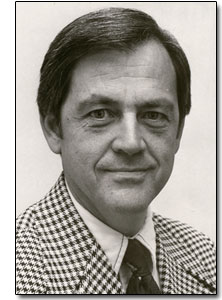 2008 Pioneer Broadcaster of the Year

His thinking and vision were instrumental in the creation of Reynolds Radio and Texas broadcasting was never the same. Reynolds has always been active in the Texas Association of Broadcasters and has encouraged other broadcasters to get involved. Past TAB Chairman John Barger characterizes Reynolds as a visionary for his efforts in 1983 to convince the Board that it needed a full-time lobbyist.

He wanted then-executive director Bonner McLane to take the reins of TAB full-time and drop his ad agency business. Reynolds was concerned the industry had too much at stake in the Legislature to have just a part-time administrator. History ultimately proved Reynolds right.

If the Board had listened, TAB would have been three years ahead of the curve when Bonner’s sudden death and a state budget crisis left us vulnerable to an Ad Tax. It was easier for those making the decisions following Bonner’s passing.

They had the benefit of recalling Reynolds’s vision for TAB – a plan which had fallen on deaf ears just a few years earlier. Kenneth “Rusty” Reynolds was born in Pittsburg Texas in 1933.

When Reynolds was a baby, he was abandoned in the woods and found by a hunter. Reynolds grew up around animals and in high school he was the state officer for the FFA. He found a love for radio at a young age. As the FFA vice president, he was asked to do the on-air ag reports at KIMP in Mount Pleasant. Soon he managed to talked his way into a full time on-air position at the station.

He went to Texas A&M in 1951 where he worked at the campus station and was a member of the Corps of Cadets. Reynolds left A&M in 1953, but never lost his Aggie pride and his love for the maroon and white. Forty-two years later, he went back to school and graduated in 1996 at the age of 63!

Reynolds spent a good part of the 50’s and 60’s behind the microphone with stops in Tyler, Shreveport, Louisville and Dallas-Fort Worth.
While Reynolds was the music director at KEEL in Shreveport, he affectionately earned the nickname Wrong Side Reynolds.

Larry Gunter tells a story of Reynolds picking the B side of “Blue Suede Shoes!” Don Logan, a former program director at KEEL went so far as to write a song called "Wrong Side Rusty".

While hosting a morning show in DFW in the mid-1960’s, he also began working in sales. His sales success led to increased responsibility and he moved into sales management at KXOL-AM. A few years later the owners decided to try generating revenue with their Class C FM station licensed to Fort Worth on 99.5.

This was well before the time when FM signals were the dominant force in the industry that they are today. AM radio was king and the FM stations gathered dust. KCWM introduced FM country music to the Metroplex in 1968 with Reynolds as General Manager.

A couple years later Reynolds jumped into ownership when he and Earl Fletcher bought KMCO-AM in Conroe. In 1974 Reynolds formed a partnership with his buddy Dick Osburn that would redefine radio in Texas. They purchased KHER-FM in Longview from Tony Bridge and changed the call letters to KYKX.

Reynolds managed the station and even worked the overnight shift for several months. The market ratings for the station during Reynold’s 11 year tenure were fantastic. During this time, he developed many creative ideas to promote the station and better serve the community.

Reynolds pioneered a new format that was somewhere between country music and adult contemporary. The result was the number one crossover station in East Texas. His next innovation was a morning show. There were a number of great morning shows, but they were dominated by men. Reynolds wanted a man-woman show that reflected the Longview community.

Larry Wilson had the men’s part and he found a candidate for the female part who just happened to be named Lou Wickersham. The “Larry and Lou” show was born and was a huge success. Although the “Lous” changed, and eventually the “Larry” changed, the show continued to dominate the Tyler-Longview market for years.

Reynolds also is credited with starting the largest bass fishing championship in the world. In 1984, they awarded a record $105,000 first prize. Most tournaments around the country had top prizes a fraction of that amount. The publicity was overwhelming. Reynolds brought major market innovation to a medium market station.

As Benny Springer tells it, Reynolds was the first in the country to have a computerized traffic and billing system. The Wang computer from Greg Dean’s company was as big as a small freezer and the discs the size of a pizza, but Reynolds was proud to bring his station into the computer age.

In 1994, Dick Osburn decided to retire. He and Reynolds sold all their stations except his beloved KAGG in Bryan-College Station.

Reynolds then partnered with his son Ken to form Reynolds Broadcasting. They went to Tyler and launched country KLBL “The Bull,” and KBLZ “The Blaze,” an urban contemporary format.

Reynolds was inducted into the Texas Radio Hall of Fame in 2003. Even though he’s semi-retired, Reynolds is still actively involved in Reynolds Radio.
He never misses a chance to play in the TAB Golf Tournament and enjoys spending time with the grandkids.

Reynolds’ determination to do all things with excellence, his commitment to passing down heritage he acquired and his unique talent for making people dig deep to find the best within themselves marks his long successful career.

He showed many an owner, operator, programmer and personality that even a small town station could have sparkle.