You are here: Home > Convention & Trade Show > Mike Wright
Welcome, guest: Login to your account
no 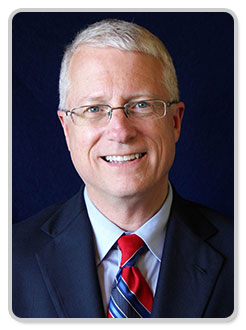 2013 Broadcaster of the Year

TAB’s Broadcaster of the Year Award honors someone who has made a commitment to excellence over the past year and is an example to others in broadcasting, as well as to his own community.

If you ask him, he’s looking forward to many more.

His career in broadcasting began at a very young age. Wright found his love for broadcasting at the age of 11, as he worked the turntables at a local radio station KBUS in Mexia.

He joined KBTX in 1991 as national sales manager and soon became co-anchor of “Brazos Valley This Morning,” one of the station’s top-rated newscasts. Wright took over the GM’s office in 2003 and hasn’t looked back.

Each week in the department manager meeting he asks, “What will you do today that will make KBTX better than it was yesterday?”

“Mike exemplifies leadership. He demonstrated to his staff that the only way to become an exceptional station is to do exceptional things,” said Ben Downs, general manager of Bryan Broadcasting.

KBTX-TV has seen many accomplishments this past year, all due in part to Wright’s leadership and vision.  In June 2012, KBTX-TV aired its first newscast in a new, state-of-the-art facility. Wright helped Gray Television engineers to plan a complete reconstruction of the newsroom and the studio.

The effort he put into the project has made history in Gray Television. KBTX-TV is the only local television station within the company to fully  “shop local” and use a local top-quality construction company on a studio redesign.

In July 2012, Wright led the rebrand of KBTX-TV’s second tier station, The CW, to CW8 Aggieland.

He created a promotions team and social media team to aide in the launch of the rebrand. Since then, CW8 Aggieland has seen a steady increase in both viewership and revenue. He has turned CW8 into a place for local viewers to find local content, including replays of Texas A&M football, the SEC Game of the Week and local high school football games which start airing this fall, something not already available in the DMA.

The station also earned its first regional Edward R. Murrow award, Newscast of the Year from the Headliners Club of Austin and two Lone Star Emmys.

Wright continues to lead with four defining statements he developed for the staff to operate by each and every day:  “I trust KBTX.  KBTX does not waste my time. KBTX is easy to watch and easy to do business with.  KBTX cares about the community and about my family.”

Wright has led by example regarding each of these defining statements. Above all, he understands that community involvement is vital to personal and professional growth.

One of the most significant ways KBTX Media contributes to the community is through their annual “Food for Families” food drive.
It’s the largest fundraiser for the Brazos Valley Food Bank, raising 203,000 pounds of food and $175,000 in 2012 alone.

“Mike has a genuine interest in our community and consistently finds meaningful ways to use that interest to better the citizens here,” said Royce Hickman, President/CEO of the Brazos Valley Chamber of Commerce.

Wright encourages each employee at KBTX-TV to be involved in the community one way or another, be it serving on a board, being a member of a service organization, coaching a little league team or volunteering at the local food bank.

Wright also hosts a segment during First News at 4, known as the “Wright Response.”

Each week, he addresses viewers’ emails and comments regarding the station’s news coverage or other community issues. The questions and comments range from viewers thanking the news team for covering a certain topic, to viewers complaining about the outfit a news anchor wore on the 10 pm news. Regardless, Wright responds to them.

In fact, he responds to EVERY email or call he receives from a viewer, good or bad; he wants them to know that KBTX is listening and cares. He also encourages his staff to embrace the station’s initiatives and create unique relationships with viewers.

“Our radio stations have worked together [with KBTX] in a cooperative effort on many community projects. When we schedule a forum with local candidates, we assume Mike’s station will be there streaming the video on the KBTX website,” Downs said.
“Mike’s leadership shows his staff that competition stops when it comes to serving our community.”

While his position as general manager keeps him pretty busy, Wright also keeps his hand in radio…his first “true love.”

For the past 22 years, he has called the play-by-play for A&M Consolidated High School football, dedicating each Friday night to the team and their fans.

This “hobby” has resulted in Wright receiving first place awards for his play-by-play from Texas AP off and on for eight years. His commitment to not only his broadcasting and management career, but also to his community and staff at KBTX-TV, is unmatched. Each day he strives to make the next day better for the staff, the community and the station.

Wright is a graduate of Baylor University. He and his wife, Bethany, have 12-year old twins, Macy and Mason.