You are here: Home > Convention & Trade Show > Meredith Beal
Welcome, guest: Login to your account
no 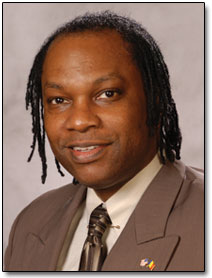 2007 Broadcaster of the Year

TAB’s 2007 Broadcaster of the Year is an advocate for localism and believes that radio stations can and should be forces for good in the communities they serve.

Meredith Beal is the president and CEO of Lasting Value Broadcasting Group. He purchased KCLW-AM Hamilton, KTXJ (now KCOX) Jasper and KWYX (now KTXJ-FM) Jasper in 2000 and has since increased local programming, added local news and created new public affairs programs.
Beal grew up in Los Angeles but his father is a native of Marshall – so Beal spent a good amount of time in the Lone Star State.

He attended college at the University of Houston, majored in journalism and eventually moved to California for a job as a reporter for the Los Angeles Times. Later he was editor of the Rhythm and Blues Report and other publications. When Motown Records founder Barry Gordy sold the company in the late ‘80s, Beal consulted on the transition. He eventually joined the company as Director of Marketing – developing budgets, marketing campaigns and working with artists. Beal also purchased 40 computers for the company (which happened to be 40 more than Motown had before!)

A longtime musician, Beal has played on and produced numerous records – everything from Gambian music to a children’s album about a character called Thursty the Elephant.

Beal eventually made his way to back to Central Texas, where he worked as global Webmaster for Dell Computer until 2001. His website received Dell’s Intranet Award for Excellence, for Best of Class Design and Usability and his team was known for pioneering in personalization and self-service web applications.

As a Buddhist, Beal strives to be optimistic and calm, despite the fact that he usually has 68 irons in the fire. On a daily basis, he is likely to be attending a TAB Board Meeting in Austin, producing a CD of harmonica instrumentals, teaching a Web development class at Huston-Tillotson University and heading to Hamilton to meet with community leaders.

Beal says his goals have always been to build businesses and serve the community. He saw a need for more service, less sensation, and more localization in news. So, in 1999 he sold some Dell stock and formed Lasting Value Broadcasting.

Hamilton’s only local radio station was at risk of being lost when Lasting Value purchased it in 2000. Key community leaders knew that if KCLW shut down, it would be a devastating blow to the area’s economic growth, as well as a loss of their most vital communication link. They worried new owners would change the station’s format and eliminate local involvement.

Beal made a point to meet with the community, attend local meetings, events and service groups to show he truly wanted the station to remain an integral part of the area. He engaged the school system and worked with the superintendent to create a flow of information about what’s going on in the schools.

Beal also has offered the station as an educational tool to give students exposure to the media. In appreciation, the Hamilton Independent School District passed resolutions placing the name Meredith Beal on the statewide Media Honor Roll in 2005 and 2006 for exemplary reporting on the community’s public schools.

In 2006, the station held “KCLW Fire Fest” and raised more than $30,000 for area fire departments that were drained by winter wildfires. The station’s new public affairs program – “What Do You Think” – is one of the most popular and features in-depth interviews with candidates for local and statewide political office. “Shout Out From Iraq” is a weekly program featuring call-ins from soldiers deployed in Iraq. The station’s annual open house allows listeners, advertisers and the business community to gather at “their station.”

Beal joined the TAB Board of Directors in 2006 and has been active in lobbying efforts. He truly believes in giving a voice to local citizens, allowing them to use the airwaves to talk about issues pertinent to the community.

Beal continues to travel the world, spreading his message of global citizenship and dialog as the best means to create a peaceful society.
As a broadcaster, he advocates localism and community focus while maintaining a global perspective.