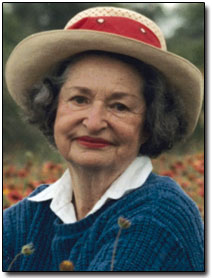 2007 Pioneer Broadcaster of the Year

Claudia Alta “Lady Bird” Johnson was a refined, soft spoken Southern lady who blazed her own trail in the competitive, and then male-dominated world of broadcasting. At the same time she raised two daughters and served our nation through a turbulent era of both social and technological growth.

Lady Bird Johnson’s purchase of KTBC-AM Austin was approved by the FCC in February 1943. In an age when two-career families were rare, she became a broadcast station owner, working full time in Austin, while her husband served in the U.S. House of Representatives.

“What kind of person have we got here?”

Austin was a relatively small city in 1943, with only two stations: KTBC and KNOW. Having no broadcasting experience, Lady Bird set out to learn what she needed to know about the radio business, including advertising sales, promotions, transmission equipment, regulations, programming and management.

Glamorous, it was not. KTBC was losing $600 per month. The broadcast signal was a weak 250 watts. KTBC had no network affiliation and limited broadcasting hours. The station’s offices were physically dirty. For a woman who built a reputation beautifying Texas’ highways, the unsightly appearance was the last straw.

“I spent one day myself with a bucket full of soap and rags and whatever suitable things there were, washing the windows, while some of [the employees] just stood around there with their mouths open thinking, “What kind of person have we got here?’”

Lady Bird moved the station to a new location and hired new management, all while putting accounts receivable in order and paying off debts as quickly as possible. By July 1943, KTBC had FCC approval to double the station’s power, change its frequency and broadcast around the clock.
In August, the station became Austin’s CBS affiliate, and Lady Bird saw her first profit of $18.

She began assembling what would become a very profitable station, learning each part of the business as needed. “I had to learn an awful lot about technical material. I learned it, got it down to some sense of understanding, and then promptly forgot it within a few months.”

Always humble, she clearly understood how to run a business. By 1945, the station had increased its power to 5,000 watts and showed an after tax profit of nearly $40,000. In just two years, Lady Bird Johnson proved to be a formidable businesswoman. Once asked if she ever felt she’d made a mistake in buying the station, she replied “No...I just felt like we had to push on.” Push on, she did.

With two young children and a husband in the U.S. Senate, Lady Bird Johnson made a daring leap into the newest development in broadcasting: television. She made the critical decision to build a VHF station rather than a less expensive UHF broadcasting facility, and the move gave KTBC a stronger signal and provided more coverage across central Texas.

KTBC-TV gave Austin its first television broadcast on Thanksgiving Day 1952, when it aired the University of Texas/Texas A&M football game. Although a modest station with no film cameras for news coverage during much of the 1950s, KTBC-TV prospered enough for the Texas Broadcasting Company to expand outside of Austin, buying interests in radio and television stations in Waco, Bryan and Weslaco. By 1959, thecompany was valued at more than $2 million.

Lady Bird made yet another gamble when she broke into FM radio in 1960. Few people had FM receivers at the time, but the merits of a signal free of interference were enough to convince Lady Bird that this was the future of radio. Renamed KLBJ-FM in 1973, the station has been on the air longer than any other commercial FM station in Austin.

Stations bearing the KTBC call sign have brought Austin many memorable moments in history. In 1944 KTBC-AM broadcast the details of the invasion of Europe on D-Day and brought Edward R. Murrow into Austin’s living rooms. KTBC-TV made its mark on television history with live coverage of the UT Tower sniper in 1966. Many will never forget young reporter Neal Spelce crouched by the Red Rover news vehicle reporting an event that forever changed Austin.

Capable as she was of making smart business decisions, Lady Bird had the gift every successful executive has: a knack for recruiting high caliber people. Nellie Connally, Ann Eastland and Louise Vine were among the mostly female wartime staff in the 1940s. Lady Bird recruited strong and capable general managers including Harfield Weedin, Pat Adelman and J.C. Kellam.

Lady Bird Johnson established a quality of service to the community which continues today. She was honored in 1998 when TAB and the Texas Broadcast Education Foundation established a scholarship in her name for a UT-Austin broadcast student.