You are here: Home > Convention & Trade Show > KMOO Staff
Welcome, guest: Login to your account
no 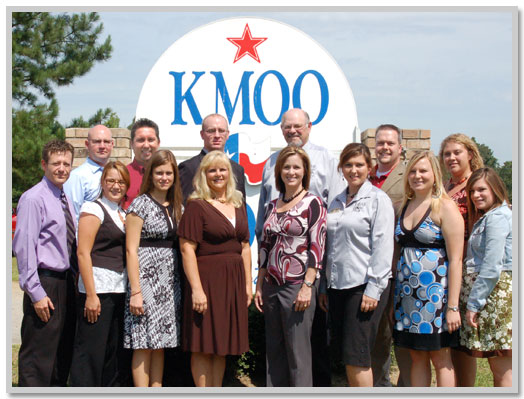 TAB salutes the staff of KMOO-FM Mineola for their extraordinary dedication to keeping the station on the air and serving the community during the Hightowers’ courageous battle with Jason’s brain cancer.

He was first diagnosed and treated in April 2004. In the fall of 2008, he shared the bad news with his close-knit staff – two tumors had re-developed. Jason was the only man who could “joke” about brain cancer, often telling the staff that they could do anything…after all he only had “half a brain.” His fighting spirit was contagious to everyone he knew, particularly the staff of KMOO.

As the entire community rallied around the Hightower family and the station with offers to help, the “Mighty MOO” team kept a laser focus on reporting the news, helping local community groups and keeping the music going.

They covered double duty by taking on another layer of responsibility coordinating listener-driven fundraising efforts to help defray the Hightowers’ medical expenses. At one point, they managed a fundraising auction in the local civic center that drew more than 600 fans and donations of prizes from children and state lawmakers alike. The event raised more than $50,000.

Former TAB Chairman Jerry Bobo, now retired from KRLD/Texas State Networks in Dallas-Fort Worth, attended the event with his wife and close friends.

“In my 40 years of broadcasting, I have seen and participated in just about every kind of promotional event you can think of, but I have never experienced the love and appreciation I saw and felt last night at this fundraiser,” Bobo said. “The small staff at KMOO was absolutely wonderful. They organized the event, secured donated items for the auction, brought their communities together and over reached their goal of paying for Jason’s medical expenses.”

After Jason’s death, the station staff simply did what they do best – kept the show running and moving forward. Jason had put a plan in place for the station and the staff was determined to stick to it. He chose only the best people for every position at the station and they remained true to Jason’s philosophy that KMOO is not just a radio station; it is part of the community.

“The KMOO staff distinguished themselves as the epitome of broadcasters who break through all obstacles so they can continue serving the community in the worst of times,” said TAB Chairman Danny Baker.“They continue to set the standard for ‘making sure Radio stays Radio’ as Jason always envisioned.”

All Local, All the Time

Amy Castleberry (General Manager) is a native of Mineola and has been with the station for 15 years. A graduate of the University of Texas at Tyler with a degree in speech communications, she is married with three children.

Tonya Slayton (General Sales Manager) has worked at the station as a teenager and also is from Mineola. She is married with four children and a grandson.

David Chenault (Operations, News Manager) is from the Dallas-Fort Worth area and also lived in Germany for a couple of years. He has a background in print publishing, is married with four children, including a newborn.

Gary DeArmond (Account Executive) is one of the first sales people Jason hired. He has “retired,” but continues to work for the station part-time. He is married with a grown daughter.

Jennifer McGee (Account Executive) has worked in the sales department for a year and is married with two children.

Samantha Willis (Account Executive) is the youngest salesperson Jason ever hired. She was only 19 when she started with the station a little over a year ago.

Robert Trammell (Sports Director, Mid-day Announcer) is a native of Mount Pleasant and has been with KMOO 18 months. He is married with three children.

Cindy Owens (Programming Director) worked at KMOO throughout her high school and junior college years and will return to the station following her graduation from Texas A&M University in August. Cindy was the only person Jason trusted to choose music for the station because they had the “same ear.”

The public service mission statement of KMOO is simple:

“Do the best you can in order to get as many people to act on the event, need or desire of the party or parties involved.”

Following Jason’s example, the staff at KMOO takes great pride in being “all local…all the time.” And it shows!