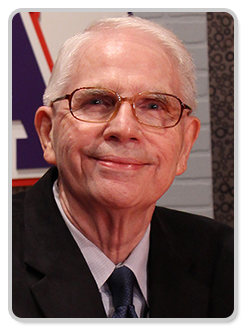 Dr. William Joseph (Joe) Oliver says, “Professionally I’m one of the luckiest people in the world because I was captivated by the magic of radio as a young boy and I was able to spend my entire work career of 49 years in some aspect of the broadcast business. I never had to do anything else.”

Oliver’s career began at age 16 when he was hired by his hometown radio and TV station, WOWL Florence, AL.

He worked a full-time schedule while finishing high school.

Oliver did TV news anchoring and announcing but his passion was radio, which was enhanced after he spent some brief one-on-one time with newsman Paul Harvey who was in town for a speaking engagement.

Harvey talked to him about radio writing and storytelling and Oliver became a lifelong fan of his techniques.

After graduating in 1967 with a Bachelor’s Degree in English and Speech from Florence State College (now University of North Alabama), Oliver next earned a Master of Arts degree in Radio-Television from the University of Mississippi.
Part of his academic work was consulting with Mississippi radio station managers and writing a guidebook for program personnel, which was distributed throughout the state.

WREC-AM-FM-TV Memphis hired him as an on-the-air announcer and radio personality and he eventually became operations manager.

A highlight of his six-year stint with the stations was researching, writing and producing the AM station’s golden history, “WREC…at 50,” a program distributed as part of commemorative ceremonies for the station.
While a full-time Memphis broadcaster, he also held a half-time faculty appointment with the University of Mississippi, where he taught broadcasting courses.

Oliver taught a year in the Radio-TV department at Arkansas State University before returning to Ole Miss for more media studies and earning his Ph.D. in 1977.

His doctoral dissertation resulted in a published, national study of broadcast managers’ attitudes and perceptions of broadcast education and curriculum needs.

His teaching centered on Radio-TV writing and media management, and SFA recognized him with a teaching excellence award. Oliver’s research interests on curriculum emphasized feedback from broadcasters for improvements in training needs.

“Upon my coming to SFA in 1992, Dr. Oliver insisted I go to my first TAB Convention, to meet broadcasters and expand my knowledge of the industry to take back to the classroom.  He was very passionate about bringing the broadcast industry to his students,” said Sherry Williford, SFA Radio & Television faculty and friend.

Oliver directed the M.A. program in communication for 30 years, which included curriculum options for professional training of broadcasters and educators.

He established a permanent broadcasting scholarship to honor his friend, the late Mike Shapiro, former president of Belo.
Oliver was responsible for designing a new university radio station, KSAU-FM, which was developed along the lines of a fully-professional station, but managed and operated by students.

During its first 12 years, more than 1,000 students were trained in professional standards of management and creative performance.

The station was cited for numerous achievements, including winning a first place public affairs award from United Press International in competition with commercial stations.

Oliver served as President of the Texas Association of Broadcast Educators in 1983 and led the group to revise its constitution to allow two-year colleges to gain membership.

In 1988, he served as President of the Texas Broadcast Education Foundation and helped launch TAB’s fundraising program that expanded the number and amounts of permanent scholarships available to students.

In 2008, and after his retirement from SFA, Oliver was named TABE Emeritus for his distinguished organizational service over the years and dedication to students.

“Dr. Joe Oliver was as passionate about educating students as he was about the commercial broadcasting field that he loved…and as careful and meticulous about preparing his courses, as he was about his work as a professional broadcaster,” said Dr. Robert Ramsey, retired SFA Communication Department chair.

Since retirement in 2007, Oliver has continued to live in Nacogdoches with his wife of more than 50 years, Gloria.

He spends time communicating with his former students, reading history and listening to radio for several hours every day.