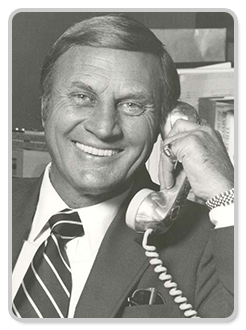 Dignified, honorable, intelligent and generous – all these are words that should be used to describe the Texas Association of Broadcasters’ 2005 Pioneer Broadcaster of the Year.
Our pioneer also is energetic, dedicated, compassionate and humble.

He’s a Texan, in the truest sense of Texas.

Jim R. Phillips has spent nearly half a century developing, programming, selling and engineering his way to notable success as a radio broadcaster, and in doing so, leaving two Texas communities better for it.

Phillips was born in 1932 and grew up in Dallas, where his father worked as an independent plumber.  He attended Forest Avenue High School and went on to serve in the United States Air Force in 1951.

After three years in the Air Force, Phillips enrolled in Texas Christian University.

In what would become a footprint for Phillips’ work ethic – not only did he graduate from TCU with a BS, but he worked his way through four years of college in three years, while raising a family and working at an accounting firm.

After graduation, Phillips worked for oilman Sid Richardson – who just happened to own a few radio and TV stations known as the Texas State Networks. That’s when broadcasting came to be Phillips’ destiny.

He started working for an ad agency – Jack T. Holmes & Associates in 1957. Phillips then joined the North Texas Advertising Company and KRBC Abilene in 1958.

In one of many impressive career moves, he transferred to Fort Worth in 1960 to take a position as General Sales Manager at KFJZ-AM/FM.

When Hurricane Beulah hit in 1967, a frightened community turned to Phillips’ station – and he didn’t let them down.  Phillips changed the format from music to all talk – tracking the hurricane, providing weather bulletins and making sure everyone was prepared for the Category Five storm to hit.  Weather bulletins may seem like the standard now, but Phillips started it all and repeated it on his station KDUV-FM Brownsville in 1975 during the threat of Hurricane Fern.

Phillips teamed up with Gary Ackers in 1969 and moved to El Paso, purchasing KHEY-AM for $700,000. The station was barely scraping by and there was a lot of room for improvement.

He and Ackers started making changes, hired a top-notch staff and took KHEY to the top of the market.  They rode the wave of the newly-popular country music for more than two decades before selling the station in 1989 for close to $9 million.

With the sale came a non-compete clause that said Phillips could not own or operate another El Paso broadcast property for five years.

That didn’t mean Phillips took a five year vacation.  In 1990, he became, and still is today, Chairman of the Board of State National Bank, a century-old institution that is now Wells Fargo Bank.

But after those five years passed, he jumped back into the business under the name Magic Media, this time with his son J.R. Phillips and Ken Tice.

In 1999, Phillips was one of three stockholders who sold KOFX-AM and KATH-FM to Entravision for $14 million.

The sale was only one of a series of successful business deals that have people calling him “the man with the golden touch.”
Throughout his career, Phillips has owned radio stations in Amarillo, Brownsville, Corpus Christi, Louisiana, South Carolina and Nevada.

Phillips served as TAB President in 1979 and was a longtime grassroots lobbyist for broadcasters in both Washington and Austin.
Someone once said the El Paso congressman (regardless of party or ethnicity) would always call Phillips before voting on major issues, for fear that Phillips might run against him in the next election!

What’s in a name?

In 1982 the Sun Bowl committee turned to Phillips to help save the second longest-running NCAA post-season football event for the city.  Attendance was down and CBS was threatening to drop its contract with the Bowl.

Phillips suggested selling the right to name the stadium to a major sponsor.  He brainstormed with his old friend Tex Schramm and they presented the concept to CBS.

The network approved with two reservations: CBS would expect the sponsor to purchase advertising during the broadcast and CBS reserved the right to approve the sponsor.

Phillips’ committee provided a list of potential sponsors to CBS and the El Paso Sun Bowl Group made a deal with John Hancock for five years – cost based on game day ratings, not to exceed $2,000,000.  CBS was satisfied and John Hancock was happy.
Phillips saved the Sun Bowl!  When John Hancock left sports sponsorship, Phillips took the endorsement opportunity to his own bank’s corporate offices and secured a seven-year sponsorship from Wells Fargo.

As a direct result of Phillips’ venue and event-naming concept, today every major post-season football event, 30 of 32 NFL stadiums, 28 of 30 NBA facilities and more than three-quarters of the Major League Baseball fields have title sponsors.

Giving back to his community

Phillips and his wife Nita have been married since 1971 and they’re both committed to working with numerous organizations to make El Paso a better place to live.

His leadership is evident in organizations from Candlelighters, Hospice and the Holocaust Museum to the Greater El Paso Chamber of Commerce, UTEP and Texas Tech Medical Center.  In the past his participation as president or campaign chairman has benefited The Boy Scouts of America, the United Way and the YWCA.

Wherever there is a cause or an activity worthy of strong support, you’re very likely to see the Phillips’ not just participating, but leading the way.