You are here: Home > Convention & Trade Show > George Marti
Welcome, guest: Login to your account
no 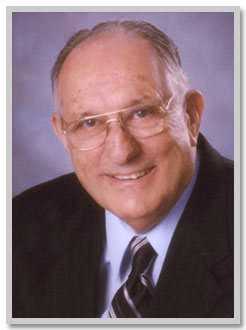 Everyone in broadcasting knows the name Marti. It’s associated with the well-known and ever-present system for remote broadcasting and Studio Transmitter Links. The man behind the name – George Marti – is a legendary Texas broadcaster who continues outstanding service to the industry and his community on a daily basis. And he shows no sign of slowing down.

George Marti graduated from Central High School in Fort Worth at the age of 16 and then attended technical school for nine months. He received his radiotelephone First Class and Amateur Radio licenses just prior to his 17th birthday (call letters: W5GLJ).

Marti says his grandmother influenced him more than any other person. He spent time at her house each day on his way home from the two-room schoolhouse at Oak Grove. She told him when he was 12 that he needed to make a business plan.

He decided that his plan would involve establishing a radio station in Cleburne.

Marti started working part time at KTAT-AM and KFJZ-FM Fort Worth. By 1938, he was employed by Tarrant Broadcasting Company, which was owned by Elliott Roosevelt and later sold to Sid Richardson.

Entering the Marine Corps in 1942, Marti went through basic training in San Diego and then to First Radar School at the Naval Research Lab in Washington, DC. During a brief leave in 1944, he met and married Jo Chambers.

After nearly four years, he returned to KFJZ where he worked until 1946. In April 1947, he and Jo put his first station on the air: KCLE-AM Cleburne. Marti designed and built his own 250-watt transmitter and audio console in his mother’s living room. KCLE-FM joined the fold in 1949. In 1953, Marti added KKJO in St. Joseph, Mo., and kept the station until 1968.

When he sold KCLE in 1960, Marti started his second career. Marti began manufacturing Remote Pickup equipment and later added Studio Transmitter Link equipment. Before he designed and built the units and successfully lobbied the FCC to allow their use, radio stations had to use telephone lines that were expensive and not always reliable.

His invention revolutionized the industry. Small stations in remote areas could be operated and stay on the air while being controlled from a larger studio in another city. He owned and operated Marti Electronics until 1994. During that time, he also had either an interest in or financially supported more than 12 radio stations. When Broadcast Electronics purchased Marti Electronics, Marti’s equipment was in more than 80 percent of radio stations worldwide.

In 1992, Marti began yet another profession. He and his late wife Jo purchased the Bank of Cleburne, which was within 14 days of failing. He owned the bank for five years, eventually merging it with First Financial of Abilene.

In the 1980s, he and Jo created what he considers his BEST business interest – the Marti Foundation. The foundation funds scholarships to help Johnson County graduates attend college. These $10,000 scholarships are aimed at helping youth in lower-income families. Students must maintain a 2.75 grade-point average and carry a minimum of 14 credit hours per semester to retain their scholarship. The foundation primarily helps those who are the first children in the family ever to attend college.

More than 300 students have received bachelor degrees from colleges and universities around the state.

Jo passed away in 2003 but her legacy lives on through the foundation. He married his current wife Margaret in 2004.

Marti served six terms as the Mayor of Cleburne and in 2003, the Cleburne Independent School District opened Marti Elementary.

Marti still retains an interest in more than 12 stations in Texas.

In 1991, Marti received Texas broadcasting’s most coveted honor – TAB’s Pioneer Broadcaster of the Year Award. In the same year, the National Association of Broadcasters presented him with their highest engineering honor. In 2001, TAB installed the Association’s first Legend of Texas Broadcasting Award on permanent display at the TAB Building in Austin.

He was inducted into the Texas Radio Hall of Fame in 2002. In 2010, the Texas Association of Broadcast Educators named him as their Broadcaster of the Year.

Marti believes that the duty of a broadcaster is to help others. “If you are not helping people, you are not doing your job.”