You are here: Home > Convention & Trade Show > Ed Glick
Welcome, guest: Login to your account
no 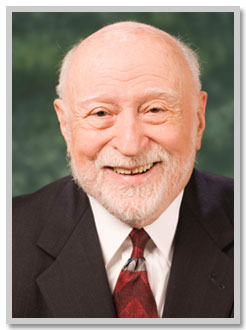 Dr. Ed Glick is a Professor Emeritus at the University of North Texas. Throughout his long career, Glick has always believed that broadcast stations should give opportunities to faculty members to work in stations so they can take their experiences back to the classroom.

Glick started his career as a French horn player. He always wanted to be a professional musician and never expected a career as a broadcast educator.

After serving in Europe in World War II, Glick returned home to Boston and earned his Bachelor’s degree in Music at Boston University, later earning a Master’s in Music Literature from the University of Michigan.

His experience in music led him to positions in audio engineering, recording and radio broadcasting. Because of his background in music and recording he was hired at WGBH-TV Boston as the sound production manager for the station’s film department.

After gaining experience in broadcast production, Glick started teaching radio and television courses first at the University of Florida, and then at Ohio University, Southern Methodist University and Wayne State University (Detroit).

He initiated a major overhaul of the division’s curriculum, which helped the division (later the Department of Radio, Television and Film) to grow and earn its current reputation as one of the highest rated programs of its kind in the United States.

When he came to UNT, there were two faculty members and 100 students. He served as chair for the department for seven years and despite the lack of funds, equipment and facilities, he oversaw the development of the program.

He also served as director of radio in the early stages of the university’s radio station, KNTU-FM. Today, KNTU-FM is a 100,000 watt radio station that serves the entire Dallas-Fort Worth market.

Even while teaching future broadcasters, Glick also worked in the industry to keep current, hosting and producing 110 public affairs programs in the series “Alternatives” for KXAS-TV Dallas-Fort Worth.

He also hosted and produced two seasons of a similar series of public affairs shows for WFAA-TV Dallas-Fort Worth.

The Council for Advancement and Support of Education recognized one of Glick’s shows about suicide for the prestigious Achievement Award in the category of Television Programs and Announcements. To continue to keep current on the latest production techniques for his students, he served faculty internships at Tele-Image, Inc., one of Dallas’ premiere production/post-production houses, and WFAA-TV, working in many production positions.

The Broadcast Education Association elected him as a member of its Board of Directors for two consecutive two-year terms.

During his years at UNT, he was active in the Texas Association of Broadcast Educators, having been elected as vice president and then president of the organization. Glick was active in helping to record and preserve the history of broadcasting in Texas. Among his publications are “The Life and Death of the Liberty Broadcasting System” and “WFAA-WBAP/570-820: Till Money Did Them Part.”

He was also awarded a first place in the “History Papers” competition by the Broadcast Education Association, for his article “A New Look at Estes v. Texas, 1987” which corrected many misconceptions about the landmark case which led to the prohibition of cameras in the courtroom for more than two decades. Ed Glick’s experience and research informed his teaching and inspired his students.

Having influenced several generations of broadcasters, educators, and media professionals, he is retired from teaching, but still available to former students for advice, support, and kind words.