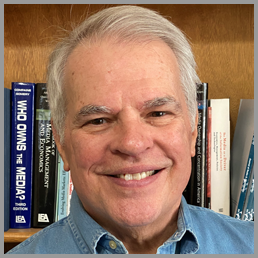 The work of TAB's Educator of the Year has demonstrated an unwavering commitment to furthering the broadcast industry through higher education, research and training in Texas and around the globe.

Dr. Alan B. Albarran is Professor Emeritus and former Chair of the Department of Media Arts at the University of North Texas in Denton.

Alan had the privilege of serving three generations of Texas students in his career at three different universities.

His resume reads like a “who’s who” of Texas universities with outstanding broadcast programs.

He moved to Texas in 1979 to join the faculty at Sam Houston State University in Huntsville and manage the school’s station – KSHU-FM.

In 1987, he and his family moved to Columbus, Ohio where Alan served first as a Teaching/Research Assistant and then as full-time instructor at THE Ohio State University.

After graduating with his Ph. D in 1990, the Albarran family moved back to Texas and Alan took an Assistant Professor position at Southern Methodist University.

At SMU, Alan established himself as one of the top researchers on media management and economics.

Over the next 10 years, he would move through the ranks to become a Full Professor and Associate Dean, as well as integrating himself within the broadcast industry in DFW.

"When Alan was at SMU, I was Market Manager for Susquehanna Radio Dallas and he regularly asked me to speak to his students. " said Texas Radio Hall of Fame Broadcaster Dan Halyburton.

"It turned out we had an earlier connection as competitors in ASHLAND Kentucky. It was 1974 He was a DJ At WAMX and I was a DJ and Program Director at WTCR. My on-air name was 'Dan the Music Man'. And YES, I am still 'Music Man' when Alan calls me on the phone."

In 2000, Alan joined UNT as Professor and Chair of the Department of Radio, Television and Film.

He established the unit’s first professional advisory board, made up of industry professionals.

In 2007, he received grants totaling $1.5 million to establish the Center for Spanish Language Media, the first such entity in Texas devoted to research in this area.

Alan retired in 2018 – after teaching many generations of students who continue to serve the broadcast industry at all levels in Texas and around the world.

A former Fulbright Scholar, he continues to research and write in retirement.

He and his wife Beverly are the parents of two daughters and grandparents of five grandchildren – who he affectionally has named “The Fab Five.”