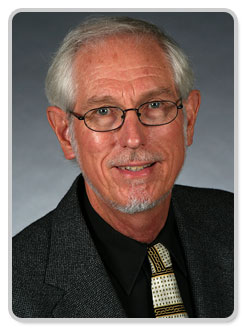 Former students and colleagues consistently mention Dr. Harp as a role model and praise his innovation, creativity and true passion for the broadcast industry.

Dennis Harp, native of Gainesville, holds a bachelor’s degree in commercial art from Texas State University, a master’s degree with an emphasis in broadcasting and journalism minor, and a doctorate in educational technology with a journalism minor (Texas A&M Commerce).

During his early days in the industry, he hoped to follow in the footsteps of Pioneer Broadcasters Wendell Mayes, Jr. and Gordon McLendon.

In 1980, Harp acquired a large broadcast collection valued at $200,000 from Gordon McLendon.

In 1981, he was responsible for obtaining the “Life Line” broadcast collection from Melvin Munn.

He added the “Facts Forum” television series that was donated by Hunt Oil Company in 1985.

All these materials are housed at The Southwest Collection at Texas Tech.

In 1982 and 1984, Harp visited Eastern Europe on trips sponsored by the Romanian government to produce television features on anti-aging medical treatments, natural curative medicine associated with that country and the Dracula myth.

At Texas Tech, he produced 45 informational, promotional, and developmental video presentations for educational, health, and public organizations and foundations that were financed by grants or for-profit enterprises.

He co-produced a half-hour newscast three evenings a week on KTTZ-TV Lubbock from 2000-2004.

Through his career, Harp was a recipient of six innovative teaching awards and one research award.

He also received the 2003 Spencer Wells Creative Teaching Award from the Texas Tech Association of Parents.

In 2007, Harp joined Dr. Jerry Hudson to document the storied careers of more than 20 members of TAB’s Texas Pioneer Club.

Harp was inducted into Texas Tech’s College of Mass Communications Hall of Fame in February 2009.

He has always believed that broadcasting is all about localism – and the more, the better.

For his students, Harp continuously stressed the need for experience in every aspect of a radio or TV station.

Even if the ultimate goal is to go into sales, a broadcaster should have a good on-air background so they can truly understand how the station operates.

“Dr. Harp was the professor of my television production class and the industry has vastly changed since then,” said John Sparks, retired Communication Department Chair at South Plains College.

“One thing did not change – Dr. Harp’s sincere love for the industry and for his students. Having him for a professor was one of the true blessings of my life.”

Harp also was a member of the Texas Broadcast Education Foundation board of directors for 10 years.

Today Harp serves on KTTZ-TV’s advisory board, The Lubbock Chorale board of directors and National Cowboy Symposium & Celebration advisory board.

Harp lives in Lubbock with his wife, Ellen, since retiring in 2008.

He is enjoying helping Ellen with her business – From the Garden – a market garden growing flowers, fruit, herbs and vegetables.