You are here: Home > Convention & Trade Show > Dan Giesler
Welcome, guest: Login to your account
no 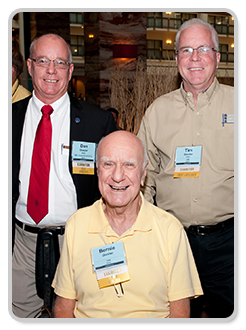 At some point in their careers, most folks in Texas broadcast engineering have bought a product from Giesler Broadcasting Supply (GBS).

Founder Bernie Giesler has been a fixture in the Texas broadcast industry for more than 50 years – and all that time, GBS has been a family affair.

Based in the Houston area, GBS has been a generous and longtime supporter of both TAB and the Society of Broadcast Engineers (SBE).

In 1978, Bernie and his wife Frances started GBS in their living room with two phone lines.  Over the years, all of Bernie’s children spent time working for the company, in a variety of capacities.

Bernie’s son Dan has been the face of the company for many years and he continues the company’s strong relationship with TAB and local SBE chapters across Texas.
Electronics always came naturally to Dan.  In his teenage years, he was busy building stereos, fixing dishwashers and rewiring the house.

In 1982, Dan graduated with a degree in aeronautical engineering when the airplane business was in a slump.  He decided to see how the family radio station equipment business was working…and business was booming.

GBS in the early 1990s continued to be a true family affair: Bernie, Uncle Ambrose, Dan, Tim, Kathleen and Joe with Bridget being utilized on special projects.

GBS came to a major crossroads in 1997.  Bernie retired and moved to Lake Conroe.

The Giesler kids looked at each other the first day after Bernie’s retirement and agreed on one thing: “We’d better start selling something.”

Through the late 1990s and early 2000s, Kathleen and Joe moved to other industries, leaving Tim and Dan at the helm.
“Dan Giesler has always exemplified integrity, knowledge and partnership in our business with him and GBS” stated Steve Davis, Senior Vice President | Real Estate, Facilities & Capital Management, iHeartMedia.

“One of the first contacts I had in the Radio Business back in 1975 was Bernie Giesler. Dan and Tim have carried on in the great tradition of their father,” said Marty Wind, Executive VP/GM, KLUX Diocese of Corpus Christi.

“To have a family continuously operate a Broadcast supply business for more than 40 years is quite notable and speaks to the integrity of their business ethic.   Dan and Tim (and Bernie) have always been there for us. Recognition is richly deserved.”
“I have found Dan to be a great help in supplying equipment for many projects, not only mine, but for many other engineers and broadcasters,” said Dan Walthers, VP of Engineering for iHeartMedia in San Antonio.

“He is always knowledgeable about his products and is very willing to go out of his way to help a broadcaster resolve an odd situation or get him back on the air the quickest way possible.”

“If a broadcaster finds a product they heard about but couldn’t get, Dan will be the one to research the product and acquire that product, or offer a better one to purchase,” said Gil Garcia, VP of iHeartMedia in Austin.

“His knowledge, integrity, honesty and kindness to his fellow broadcasters and competitors have made him a valued leader and friend to us in broadcasting.”

Bernie was one of the first vendors to serve on the steering committee to plan the TAB Convention’s technical program.
For many years, GBS has been one of the first companies to sign up for the booths in the Trade Show, simply underscoring their commitment to the TAB.

One of their most successful events is the annual Engineers Dinner – now in its 26th year with more than 150 annual attendees.
Vendors, manufacturers and dealers from all over the nation come together to support TAB and Texas SBE. Dan is very proud that GBS is one of two founders of the event.

GBS continues to supply the latest technology and help broadcasters stay on the leading edge of communication advances.
For the first time in TAB history, broadcasters are presenting GBS with their second Associate of the Year Award.