You are here: Home > Convention & Trade Show > Clint Formby
Welcome, guest: Login to your account
no 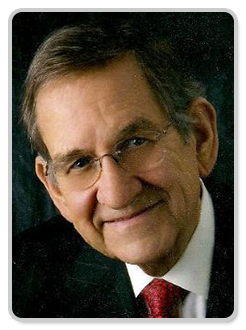 Clint Formby was born Dec. 6, 1923 in McAdoo, Texas to John and Willie Formby.

He attended schools in Plainview and McAdoo and graduated from McAdoo High School in 1942, where he played basketball, tennis and was quarterback on the six-man football team.

He began college at Texas Tech upon high school graduation, but then enlisted in the US Army.

Formby remained in Switzerland after the end of the war in April 1945 and attended the University of Switzerland in Basel.

He returned stateside and re-enrolled at Texas Technological College, where he was a member of the Socii fraternity.

He was elected president of the Texas Tech student body his senior year and graduated with a Bachelor of Arts degree in journalism in 1949.

While at college, Formby worked during the summer of 1948 to help his uncle Marshall Formby construct KPAN-AM Hereford, working as a carpenter and painter.

His was the first voice on the new radio station when it went on the air August 4, 1948.

Marshall Formby, 12 years older than Clint, was a former county judge and former state senator who went on the serve on the Texas Highway Commission and ran for governor in 1962, with Formby as his campaign manager.

While in college, Formby met Margaret Clark, who was the first Miss Texas Tech.

They courted and were married September 16, 1950 in Van Horn (Margaret’s hometown).

The young couple moved to Colorado City, where they rented a garage apartment from Mr. and Ms. George Mahon, the future US Congressman.

Formby also helped put a radio station in Snyder on the air.

They moved to Hereford August 22, 1951, where he went to work at KPAN and Margaret taught high school English and speech.

In the 1950s, he would ride the train from Hereford to Chicago to attend the yearly convention of the National Association of Broadcasters (NAB).

Formby also began a daily radio commentary in October 1955 on KPAN called the “Day-by-Day Philosopher,” which broadcast at 7:45 AM, six days a week.

“My little program,” as he called it, continued for nearly 55 years until the day before his death,

Formby believed it is the longest-running radio broadcast by an individual in the United States.

During the period 1962-1972, KPAN received more TAB awards than any Texas radio or TV station.

It is one of two Texas radio stations retained by same family ownership for over 60 years.

Formby became involved in the growing community of Hereford.

He was a member of Jaycees and a past-president of the Kiwanis Club, where he also served as district lieutenant governor and was involved in chartering two new clubs in West Texas.

He served as president of Deaf Smith Chamber of Commerce and received the group’s Citizen of the Year award in 1964.

Formby was a member of First Baptist Church, where he taught the boys’ high school Sunday School class for several years.

He later was a charter member of Fellowship of Believers Church.

He received the Texas Communicator of the Year from the Southern Baptist Convention.

Formby brought cable TV to Hereford. First it was only a few satellite channels, but eventually the full spectrum; and he served managing partner of Hereford Cablevision from 1975-2006.

He was a member of the University’s Board of Regents for 12 years and served as chairman.

Formby was involved in the work and lobbying of the legislature to establish a medical school and school of law at Texas Tech.

He served for years as a board member and then president of Texas Tech Ex-Students Association, now Texas Tech Alumni.

He was named a Distinguished Alumnus of Texas Tech University.

He served as a board member and then chairman of the Ranching Heritage Center in Lubbock.

He was honored by being inducted into the Mass Communications Hall of Fame, received the Lifetime Support Award in 2001 and has a classroom named in his honor at the school.

Formby was a leader in the broadcast industry at the state and national level.

He was one of dozens of small-market radio owners who made the Texas Association of Broadcasters viable in the 1960s, and went on to serve on the board of directors and as president of TAB.

Formby has been named both Broadcaster of the Year (1994) and Pioneer Broadcaster (1979) by that state organization.

He also served as the small-market radio representative on the board of the National Association of Broadcasters and was chairman of the NAB Radio Board.

He served 16 years as a board member for Broadcast Music Incorporated (BMI), one of three major music-licensing firms in the United States.

He also served for several years on the executive committee of BMI.

He was an original board member of Texas Telecommunications Infrastructure board.

He and his wife made many close friends on those various boards, and also had the opportunity to travel across the globe.

Trips included an AP trip to Castro’s Cuba and other trips to China, Japan, Canada, Hawaii, Mexico, the Caribbean and virtually every major city in the United States.

He loved to report those travels to his hometown audience on his daily program, which he taped in advance of any trip out-of-town.

Formby was unique in several ways, a few of which can be quantified.

He was the only person to ever appear on the cover of Texas Highways magazine, which set off a minor furor that Formby very much enjoyed.

He was the only single person to have held the offices of Texas Tech student body president, Board of Regents chairman and president of the Ex-Students Association.

He was a dedicated Texas Tech sports fan and held season football tickets since the 1950s, first in section 106 then in section 4 at Jones Stadium.

He loved everything red and black.

Formby had insatiable curiosity and was a voracious reader, subscribing to four daily newspaper and numerous magazines and periodicals.

He watched TV well into the night, and many of his daily radio programs were based on something he had seen or read or heard that deserved further discussion.

Formby was diagnosed with prostate cancer in 1998 but underwent radiation therapy, recovered and gave a running account of the disease and treatment on his radio show.

His frank and open dialog resulted in two Texas Media Awards from the American Cancer Society in 1999.

Ultimately, multiple myeloma was detected in 2005.

Formby loved people and loved to hear their story and had a way of making anyone feel as if he were really, truly interested in their conversation – which he was.

His daily trips to the local banks and post office highlighted his days in Hereford, when he could tell his latest travel story and catch up on the latest local gossip.

He tirelessly promoted Hereford and West Texas to anyone and everyone he encountered in his travels.

Formby’s wife, Margaret, was mother to their children and his main cheerleader.

After the kids were grown, she founded the National Cowgirl Hall of Fame and Western Heritage Center in Hereford and served as its executive director until it moved to Fort Worth.

Since 2003, Formby, Chip and Chip’s sons have all worked at the Hereford station – the only Texas radio station with three generations of the same family involved in its operations.

View Formby’s interview for the “Pioneer of the TAB” project