You are here: Home > Convention & Trade Show > Buddy Bostick
Welcome, guest: Login to your account
no 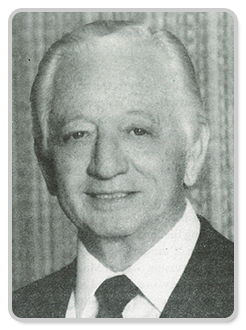 Buddy Bostick is the 1996 recipient of the Pioneer Broad­caster of the Year Award-the Texas Association of Broadcast­ers' highest honor.

One of the hardest working broadcasters in the industry, Milford Nelson Bostick joined the entertainment scene at an early age-playing the guitar as a way to avoid chopping cotton or pulling corn on his parents' farm near Moody, Texas.

This young boy eventually would ultimately leave his mark on an industry that was only in its infancy-television-when Bostick was playing his Sears & Roebuck guitar.

During his 20 years on the committee, he was the principal force behind the attempt to modify the U.S. copyright law to provide for source licensing for music in syndicated television programming.

His undying efforts ultimately led to the pay­per-program basis for television music. Without his efforts and energy, television music license fees would be significantly higher than they are today.

According to fellow committee members Bostick was a consistent source of reason and non-capitulation in the negotia­tions. He enlisted Sen. Phil Gramm to help educate many members of the Senate and House.

A radio broadcaster first, Bostick's voice led him to his first radio job. Every weekend, listeners could tune in to WACO Waco to hear the yodeling stylings of "Buddy" Bostick.

The nickname stuck, and Bostick began entertaining at events and on radio stations all around central Texas, even going as far as Dallas/Fort Worth and Galveston. All this before the age of 12!

Bostick attended Baylor University in Waco where he began his own radio program, and then served as manager of the campus radio station.

Former Texas governor Pat Neff recognized the good public relations Bostick was providing for the university and, as president of Baylor at the time, paid for all of Bostick's tuition, room, board and fees.

As World War II began, Bostick was back in Texas and starting a new job with KRLD Dallas. He soon joined the Army Air Corps and earned his wings and a commission, but not even a war could keep Bostick out of broadcasting!

He kept in constant communication with Buford Jester (who later become governor of Texas) and a group of Waco businessmen who were thinking about investing in a new radio station for Waco.

Bostick convinced them that he was the only man for the job, and in 1946, Bostick put KWTX-AM on the air, and became the youngest radio manager in Texas.

KWTX Broadcasting expanded to include KWTX-TV in 1955, and KWTX-FM 15 years later.

Bostick's flying skills helped him lead the broadcasting industry to new heights. When a killer tornado hit Waco in 1953, Bostick and his chief engineer devised a way to broadcast "live" from a fixed wing aircraft.

As they flew over downtown Waco and the surrounding areas, Bostick reported on all the destruction for KWTX-AM. His efforts earned him TAB 's Public Service Award that year, presented by then-president Boyd Kelley of Wichita Falls.

His efforts also helped to bring the world's first televised trial to KWTX-TV in 1955. When the Harry Washburn murder trial started in Judge D. W. Bartlett's 54th District Court in Waco, it was broadcast into all the homes in the KWTX view­mg area.

Through the years, Bostick has insisted upon professional­ism in all areas of his radio and television stations and has retained a strong sense of service to the community. On several occasions, he rejected network programs because of their con­tents and the possibilities of negative effects on the families in the viewing area.