Marriott is a 2008 graduate of the William Allen White School of Journalism at the University of Kansas. 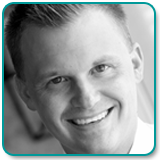 During his four years at the University of Kansas, he worked as a public relations intern for NASCAR and a sales and marketing intern for the NFL’s Kansas City Chiefs.

In May of 2008, he was awarded a Bachelor of Science in Strategic Communications.

Following graduation, he joined the Kansas City Chiefs as an account executive. Within the first six months, he posted over $100,000 in ticket sales (and this was during back-to-back losing seasons). He quickly discovered a career in sales.

After his relationship with the Kansas City Chiefs ended, Marriott joined P1 Sales Systems LLC and assumed responsibility as Account Manager. In two plus years as account manager, he implemented thousands of users to the P1 Learning training campus. Marriott was promoted to V.P. Sales/Marketing for P1 Learning in August 2011

He currently resides with his wife, Lyndsay, in Prairie Village, KS.

« Back to the Convention & Trade Show Calendar