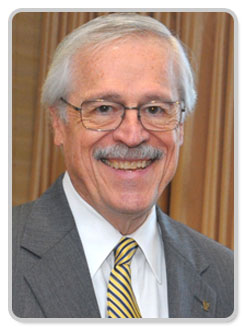 2012 Pioneer Broadcaster of the Year

Throughout his career, TAB’s 2012 Pioneer of the Year has worked to advance the public service interests of broadcasters, whether in the commercial broadcast industry or public television.

Bill Moll’s career can be summarized with one word – Localism.

By his description, Moll has always “had a decent set of pipes.”

When he turned 16, Moll called his hometown radio station and made an appointment to meet the GM and talk about breaking into the broadcast business. Three days later, he was on the air…and he’s never stopped since.

He continued to work at local radio and television stations throughout college – doing everything from on-air work, to traffic, sales and copywriting.

Moll graduated with an English degree from Southeast Missouri State University and earned his Master’s degree in Communications and Education at the University of Texas in Austin.

From there, he went to work for the Southwest Texas Educational Television Corp. They held the license for the public television facility serving San Antonio and Austin. Moll was part of the team that signed-on the station – KLRN-TV – in 1962. He would spend the next five years as station manager, based in San Antonio.

Moll credits Pioneer Broadcaster Wayne Kearl with much of his success. Kearl was the longtime president of KENS-TV San Antonio and he’s the reason Moll returned to San Antonio in 1972.

“Bill is a classy person, a community-minded broadcaster and a real credit to the industry,” Kearl said.

TAB honored Kearl with the Pioneer of the Year award in 1981.

In 2000, he returned to San Antonio as President/CEO of Clear Channel Television, and later served as Chairman. By the time Clear Channel sold the TV division it had expanded to 56 television stations in 25 markets under Moll’s leadership.

After nine years with Clear Channel, Moll returned to his roots at KLRN-TV. He serves as President and CEO of the Alamo Public Telecommunications Council.

He has always been committed to creating relevant local content for each station or group he has led. Most recently, at KLRN, he revived the station’s commitment to local content by establishing “Texas Week with Rick Casey,” a weekly public affairs broadcast, as well as “Conversations,” a weekly interview program with notable citizens of San Antonio and South Central Texas, and will add a local Arts & Culture series in the fall.

Under his leadership, the station has committed major resources to broadcast all three San Antonio Fiesta Parades.

The broadcasts marked the first time the parades were aired in High Definition and on two channels (in English and Spanish), as well as on a global, live Internet stream – serving 50 countries and 49 states.

Though his career has taken him all over the United States, Moll remained engaged with TAB and participated in industry matters every time he returned to Texas. He has always believed in TAB’s efforts to be the link between broadcasters and regulators, lawmakers, advertisers and the public.

Moll continues to be an effective spokesman on industry issues.

He serves on the Board of the Texas Association of Public Broadcasters (TPBA), the Public Television Major Market Group (PTMMG), Pres./CEO KLRN, as a Director of New Vision Television (a for-profit Television Group) and was Founding Chair of the Board of NOWCastSA.com, a community-based neighborhood news website funded in part by the Knight Foundation and the San Antonio Area Foundation.

He is a former member of the board of the New York State Broadcasters Association and chaired TAB’s Board of Directors in 1984.

Moll led the TAB Board to again defeat the Texas Legislature’s attempt to tax advertising, launched the first “Radio Day,” created an important campaign to help broadcasters deal with drunk driving in Texas and began an ombudsman program with the FCC.

Moll was twice elected to the board of the National Association of Broadcasters, chairing the first-ever High Definition Television Committee in 1986.

He served the Television Bureau of Advertising as both Chair of the Board and President/CEO of the industry trade association, and served for eight years in the leadership of the board of The Broadcasters Foundation of America, benefiting broadcasters who have fallen on hard times.

In terms of “localism,” Moll continues his long-held belief that broadcasters should serve not only the needs of viewers and listeners, but contribute to the success of local non-profit organizations.

He currently serves on the boards of directors of the Greater San Antonio Chamber of Commerce, San Antonio Area Foundation, United Way of San Antonio & Bexar County, University of the Incarnate Word, Masters Leadership Program of San Antonio and the Tobin Center for the Performing Arts, among others.

He is the retired Chairman of the World Board of Governors of the USO, the premier organization supporting America’s military since 1941.

As Chair, he guided the creation of The USO Foundation to help ensure sustainability of the USO mission.

He is proud to be involved with the USO to help provide a tangible, straightforward way for the American people to say “Thank you” to the troops.

Moll says he has no plans to retire.

To him, broadcasting has never been a “job” – it’s a way of life.