You are here: Home > Convention & Trade Show > Bill Carter
Welcome, guest: Login to your account
no 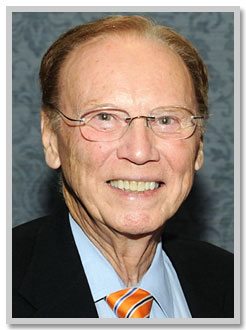 Bill Carter’s broadcasting career spans an impressive 60 years. During his time in the industry, he has witnessed the advent of color TV broadcasting and the use of video tape, among many other innovations. He is still excited by the changes he sees for the future of the medium.

Born in Dayton, Ohio, he joined the Army Air Corps at the age of 17, right after he graduated from high school.

He remained in the Air Force and Naval Reserves – serving a total of 43 years active and reserve duty.

He began his career in radio in 1949 at KPAC Port Arthur at age of 21. Spending just a few months there, he moved on to his first “real job” at KEBE Jacksonville and eventually KIVY Crockett.

In Crockett, he served as announcer, engineer and was eventually promoted to manager. Carter felt his training in the Army Air Corp and flight weather service with recent radio experience would help him get a job as a TV weatherman.

Even more, it was his lack of a southern accent that helped him get the job. In 1959, Carter transitioned to television at KTRE-TV Lufkin-Nacogdoches, replacing Murphy Martin (who left for WFAA-TV Dallas-Fort Worth and later ABC in New York).

He would spend the next 12 years in East Texas. His varied experiences in radio made for a smooth transition to television.
He started as news anchor and was eventually promoted to program director and then sales manager.

In 1964, the Tyler-based Buford Group purchased the station and promoted Carter to general manager/vice president.

Carter served on Buford’s acquisition team and was responsible for buying and operating radio, television and cable operations in Texas, Ohio, Arkansas, South Dakota and Indiana.

In the early 1970s, an opportunity arose and he took over as manager for KZTV-TV Corpus Christi and KVTV-TV Laredo.

He would spend four years working for owner and mentor Colonel Vann Kennedy.

In 1975, he moved to Houston to run the radio and television network for the Houston Astros. During the four years he was with the Astros, he was responsible for hundreds of live broadcasts. One of his jobs was to find stations to carry the games, as flagship KPRC-TV could only carry 11 of the 162 each season. That’s how he met Raymond Schindler, who Carter describes as “the most unforgettable character I’ve ever met.”

Schindler was founder of Hurricane Chain Link fence and a majority stockholder in KDOG-TV Houston (Channel 26) – now KRIV-TV.
In 1979, Carter took over as the president of the broadcast division for Schindler Interests.

The station was supposed to be an ABC affiliate but Cap Cities bought ABC and the deal dragged on and on. The station was an independent station in the 190th market. As Carter said, “not a pretty sight.” Rupert Murdoch came along and KIDY was the 14th station to sign with the new FOX Network. He later established KXVZ/KIDZ-TV Abilene. He stayed with the stations until his unofficial retirement in 2007.

In 2008, Sage Broadcasting entered into an LMA agreement with Bayou City Broadcasting for the purchase of the Abilene and San Angelo station. Carter continued to serve as a consultant for Sage Broadcasting until 2009. Carter has always been extremely supportive of the TAB and the association’s service to the industry.

He served multiple terms on the TAB Board of Directors and also over the years has been on various boards including the Fox Television Board of Governors, Jaycees, East Texas Area Council, Girl Scouts, Boy Scouts and Rotary International.

He is enjoying spending time with his wife, Anne-Marie and visiting family in different parts of the country as well as abroad. Carter advises future broadcasters to learn to listen to other people. Hire people with high energy, curiosity and a passion for life. Broadcasters must prepare for change with excitement.