You are here: Home > Convention & Trade Show > Bill Buchanan
Welcome, guest: Login to your account
no 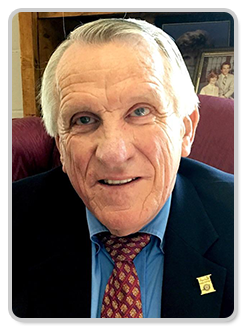 When you look up “Small Town Radio” in the dictionary – there will be a photo of Bill Buchanan.

Buchanan has spent 51 years in broadcasting with nearly 40 of those serving the communities of Liberty and Dayton, in Liberty County in Southeast Texas.

Buchanan began his broadcasting career at various stations in Kentucky and Ohio before moving to Texas to become station manager of KGTN-AM Georgetown in 1969. He also worked at KBOP-AM Pleasanton and KCLT-AM Lockhart.

In 1977, he bought KPXE Liberty (with some financial help from his brother John) where he operated all phases of the station. He applied for an FM license in 1986 and when he finally got FCC approval in 1991 – KSHN-FM “Shine all Nine” joined the airwaves in Liberty.

At KPXE, an AM daytimer, Buchanan would record the Liberty Panthers and Dayton Bronco football games and broadcast them on Saturday, back to back. After signing on the air in 1991, KSHN-FM would carry one game live and the other followed, via recording.  The station rotated the games they aired live each week.

When Buchanan and, his wife Jana, first came to Liberty, they promised, “What we do for Dayton we will do for Liberty and vice versa.”

This commitment to the community led to one of Buchanan’s most ground-breaking ideas – split-channel sports.

In November 1991, Buchanan conceived, developed and aired the first football play-by-play using the split channel sports concept. Two games aired at once – one on the left channel and the other on the right channel of the FM stereo station. Since then, they have aired both games live in that manner each week. Several years ago, they added website broadcasts and have expanded that to five high school games on KSHN.com each week.

Many times, Buchanan has donated – out of his pocket – to the teams to be sure they have what they need to excel in sports and learn leadership and teamwork.

In 2015, on his 74th birthday, Buchanan celebrated 50 years in broadcasting, and was surprised – live on air – when his daughter Dr. Kellie Buchanan lined up calls and visits from friends and colleagues as well as proclamations from city, county and state officials.

Years ago, when many small town radio stations were only reporting each morning what happened the night before, Buchanan devised a scheme to break into normal programming from his vehicle and give on the scene, immediate reports about major fires, wrecks and weather conditions. And that was done without a live announcer at the studio.

In both Hurricanes Rita and Ike, Buchanan and several staff members moved into the station to be on the air day and night, broadcasting lifesaving information about evacuations, as well as the locations of food, ice, water and other desperately needed supplies.

The Texas Association of Broadcast Educators honored Bill with the Broadcaster of the Year Award in 1995.

In 2011, Buchanan was inducted into the Texas Radio Hall of Fame. He has been a continuous TAB member since 1969 and has set the record for attending every TAB convention since then, except the one that was held in Acapulco.

He has served multiple terms on the TAB Board of Directors, led the Golden Mic Club, co-chaired TAB’s sportscaster seminars and enthusiastically supported the NCSA program. Few broadcasters are as connected to his lawmakers as Bill. He’s happy to provide the most valued service a lawmaker could want – an open microphone to discuss community concerns.

Over the years, Buchanan has served in almost every civic organization in Liberty and Chambers County and donated blocks of advertising time to fundraising efforts for the historical society, children’s advocacy, volunteer fire departments, police support groups, the Girl Scouts and Boy Scouts and numerous other local volunteer groups.

A longtime member of the Liberty Rotary Club, he also established a trust to permanently fund college scholarships for local students and led a project to construct the county’s first hospital heliport in 1985 and then again in Dayton in 2010.

Buchanan served multiple terms on the board of the Liberty Dayton Area Chamber of Commerce – raising funds and leading an effort to buy and remodel the chamber’s now permanent home in 1998.

“Those who know Bill, know that he has no hobbies. He doesn’t golf, fish, bowl or hunt, but instead is dedicated to radio broadcasting and serving his community,” said Mike Lout, general manager of KJAS Jasper.

“An owner, manager, news director, salesman, sportscaster and community leader…Bill does it all.”