You are here: Home > Convention & Trade Show > Becky Muñoz-Diaz
Welcome, guest: Login to your account
no 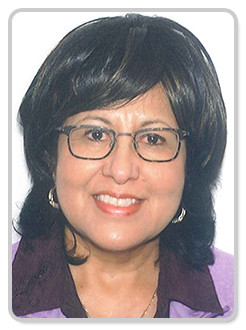 In her more than 30 years of building English and Spanish language stations and serving two of the nation’s largest media markets, she was known and respected by her colleagues and competitors for growing ratings and revenues with an eye on the future for TV and Radio alike.

A native Texan, Muñoz-Diaz began her broadcast career in college at the University of Houston’s campus radio station. She received her Bachelor of Arts degree in Radio and Television Communications from UH in 1981 and went straight to work in sales at KCOH-AM and traffic at KIKK-AM-FM, all in Houston.

She led the efforts to establish three stations in the Houston area, including Grant Broadcasting’s KTXH-TV and El Dorado Radio’s KXTJ-FM/KQQK-FM – all now owned by Univision – as well as Telemundo’s KTMD-TV, now owned by Comcast-NBCU.

KXTJ-FM “Super Tejano 108” was the top-rated bilingual station in the summer of 1994 after only being on the air for nine months.
From 1995 to 2014, she served as General Manager and Vice President for Univision’s KUVN 23 and UniMas KSTR 49 – the number one and number two top-rated Spanish language stations in Dallas-Fort Worth, the fifth largest TV market in the country.

During her tenure with KUVN-TV, she expanded local news programming from 90 minutes to 22 hours a week, including the addition of the region’s first Spanish weekend newscast and early morning news program.

She and her team created marketing strategies for advertisers to reach and connect with the DFW Latino community by creating segments such as “23 a Su Lado” (23 at Your Side), “Desde la Communidad” (From the Community) and “Linea Abierta” (Open Line), as well as Univision events like the annual Tamale Festival and Copa Univision Soccer Tournament.

She served on the TAB Board of Directors from 1999 to 2003, often traveling to Washington, DC advocating for industry positions on key issues before Congress and the FCC.

She has been a trailblazer, opening the doors for women in the broadcasting industry while remaining committed to bringing awareness to community concerns.

In 1996, Muñoz-Diaz launched a partnership with Dallas ISD to advance opportunities for the Spanish-speaking community by showcasing the schools and programs through live radio remotes, interviews and news reports on the KUVN community affairs program “Vive la Mañana.”

Her efforts earned plaudits in 2014 from Dallas ISD Superintendent Mike Miles who said “Our parents are better informed because of her belief that education can transform lives.”

Throughout her career, Muñoz-Diaz has volunteered with various professional and community organizations earning recognition from local and regional community leaders.
The National Diversity Council named her one of the most powerful and influential women in Texas in 2013.

She is a longtime member of Alliance for Women in Media (formerly American Women in Radio and Television), and past Chair of the Senior Source of Dallas and current Honorary Director.

She served on the Advisory Committee of the Ad Council of America for North Texas, Executive Advisory Board of the University of North Texas’ School of Communications and is a LIFT Advisory Council member.

Never faltering in her professional and volunteer leadership – even in her successful fight to overcome cancer – Muñoz-Diaz has pursued her love of helping people by encouraging community organizations to speak out on the airwaves so they could help them become better citizens and parents and build a stronger community.

Though she retired from Univision Media in 2014, she currently serves on the Board of the Hispanic 100 organization where she was President in 2009. She also serves on the AT&T Performing Arts Center Executive Community Engagement Committee.

Becky Muñoz-Diaz is the very model of how to overcome adversity, advocate for the industry’s goals and advance all communities while succeeding in a fiercely competitive marketplace.