You are here: Home > Convention & Trade Show > Gerald Haskins
Welcome, guest: Login to your account
no 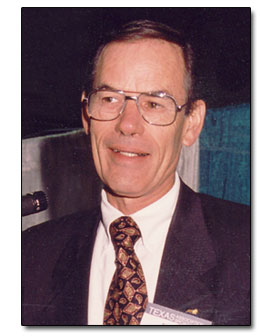 Dr. Gerald Haskins is a former broadcaster and retired from teaching at Texas A&M University-Commerce in 2004. He has inspired countless students and made many positive contributions to broadcast education.

Haskins didn’t start off with plans to become a broadcaster. He attended Indiana University, majoring in theatre. It wasn’t long before he realized a theatre degree wouldn’t bring home the big bucks, and he changed his major to communications.

After college he joined the Armed Forces and was stationed in Wiesbaden, Germany. A letter went out to all Air Force personnel looking for people interested in the Armed Forces Radio & Television Service. Haskins went in for the interview at headquarters.

The Captain told him to sit in a room with a microphone and read from a book. A few minutes later the Captain’s voice came over the loud speaker and said, “OK, you’re hired.”

Two days later, Haskins received a special assignment to go to Zaragoza, Spain. His first day on the job, the Sergeant told him “Go into the control room. Airman Smitty will break you in.”

“That’s a console…Here’s the control board...I’m going to get coffee.”

Smitty didn’t come back for four hours. It was a true baptism by fire, but Haskins figured it all out by the end of the day.

Haksins went back to school in 1966 on the GI Bill at Indiana State University and majored in Radio-Television. In 1970, he was hired to direct the broadcast division at Madison College in Harrisonburg, Virginia.

He left teaching in 1974 to run an FM station in Harrisonburg. At the time, most AM/FM combos were just simulcasting. Haskins took a risk and decided to turn the FM into a full stereo rock station. The station ended up grossing $75,000 in the first year, which was a lot for a small market station in the 70’s.

Haskins got his Ph, D. in mass communication from Florida State University in 1978. He headed to Commerce, Texas in 1984.

Haskins became co-director of broadcasting at East Texas State University along with Dr. Robert Sanders. He became actively involved in the Texas Association of Broadcast Educators and served as their Representative to the TAB Board for more than six years.

In addition to teaching, he managed KKOM, the campus radio station and hosted the local television public-affairs program “Talk of the Town” for 20 years.

He retired from full-time teaching in 2004. Since then, he and his wife purchased a house in Ingleside where they have been enjoying replacing the broadcast lifestyle with the bayside life.

TAB salutes Dr. Gerald Haskins for his years of inspired teaching, as well as his efforts to bring broadcasters and educators together.