You are here: Home > Convention & Trade Show > Don Jones
Welcome, guest: Login to your account
no 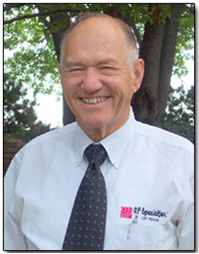 From legal assistance and programming to new transmitters and sales training, Texas broadcasters turn to TAB Associate Member firms on a daily basis for the products and services to keep their stations up and running.

Over the years, TAB's Annual Convention & Trade Show has become the largest state broadcast association event in the nation. None of this would be possible without support from Associate Members like tonight's award recipient – Don Jones with RF Specialties.

After high school graduation, Jones moved from Amarillo to Orlando, Florida to pursue his dream of a career in photography. When he wasn't able to make ends meet he began looking for work doing anything to help put food on the table and pay the rent.

After 18 months he headed back to Texas and took a job at KCUL-AM Dallas-Fort Worth. Jones did a little bit of everything at the station – DJ'ing, climbing towers, changing light bulbs… jack of all trades, master of none, but learning as much as he could!

He attended Texas Christian University while working at the station and stayed in the Metroplex for two years before returning to Amarillo for a job at Hertner's Camera Store. But, Uncle Sam had other plans for him! In 1958, he packed a small bag and began a two-year stint in the Army, stationed in Yuma, Arizona.

With his electronics background obtained in the military, Jones joined the Muzak team in January 1961 – working for Muzak until the company sold in 1965. McMartin Industries, the primary manufacturers of the Muzak equipment, asked Jones to come on board with them. He worked in sales and marketing there for nearly 20 years.

Jones and John Schneider founded RF Specialties in 1982 as an alliance of independent broadcast suppliers.

Now, the company has grown to 12 offices throughout the United States, with 13 sales people helping to fill the needs of stations across the globe. Broadcasters depend on RF for products such as AM and FM transmitters, antennas, audio consoles, microphones and amplifiers.

More than that, Texas broadcasters have come to rely on Jones' more than 50 years of industry knowledge and experience.

"Don is one of the most honest and hard working broadcast equipment dealers in the industry," said Tieline Technology's Jim Godfrey. "Many times, I've called Don about some sales issue only to find he's out at the transmitter site, helping a client who was off the air," Godfrey said.

"There wasn't a sale involved. Don just knew how to fix it and the client didn't – simple as that. And he didn't get paid for the work. Don considered it part of his service and it was just ‘doing something for a friend.'"

The RF Specialties Group has been a TAB Silver Star Associate Member since 1989 and they've participated in the convention for more than 20 years.

"When I first joined TAB in 1987, we were barely making ends meet and the convention was a daunting project. But Don's support and involvement helped see us though those times and make the event what it is today," said TAB Executive Director Ann Arnold.

In 2005, the National Association of Broadcasters honored Jones for attending the past 40 NAB Conventions – and he's well on his way to the same record at the TAB Convention!

Don and his wife Doris live in Amarillo.