You are here: Home > Convention & Trade Show > Ann Arnold
Welcome, guest: Login to your account
no 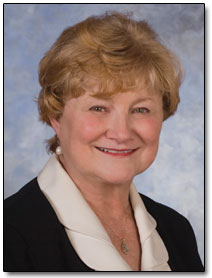 Beverly Ann Watson was born April 6, 1945 in Jackson, Mississippi, the first daughter of Bill and Mildred Watson. She spent her early years in Little Rock, where her interest in journalism was fostered by the publicity generated by the forced integration of Central High School in 1959.

Ann noticed a marked difference between the way the local and national media covered the events.
“I was always fascinated by the media and its ability to uncover the truth…how important that was,” she would say later.

After moving to Fort Worth, journalism clearly became her passion. She started her junior high school newspaper, wrote for the L.D. Bell High School newspaper and moonlighted for community newspapers, covering evening city council and school board meetings.
In 1963 she went to Texas A&M Arlington, unable to get the needed scholarships to attend the more expensive University of Texas at Austin.
She transferred to UT in 1965 and worked three jobs to pay her way, including the Capitol bureau of the Dallas Times-Herald.

Ann won a 1966 Headliners award for a Dallas Times-Herald series on LSD use and also worked on the Daily Texan. She graduated UT with a B.A. in Journalism in 1968 and joined UPI’s Capitol bureau under David Anderson, now a professor at the UT School of Law.

That year she married her high school sweetheart, Reg Arnold, and worked at UPI while he finished law school. The couple’s first son, Bill, was born Jan. 14, 1972. Never one to slow down, Ann was hanging sheetrock at home the day before Bill was born and a few weeks later jumped back into reporting on the gubernatorial election that featured a primary runoff between Frances “Sissy” Farenthold and Dolph Briscoe.

The Texas Capitol was rocked by a series of scandals in the 1970s, and Ann reported on everything from nepotism to a state legislator who used state postage stamps to buy a new pickup truck.

She joined the Fort Worth Star-Telegram in 1980, despite the fact that Star-Telegram reporters turned her down for a college scholarship because she was a woman and they feared she wouldn’t pursue a journalism career after graduation.

While reporting on Gov.-Elect Mark White’s plans for his administration in 1982, he asked her to be his press secretary.
“I had never thought about leaving journalism,” she recalls and agreed on the condition the Administration be as open as possible with the public. She was the first female press secretary to a Texas Governor.

Gov. White’s administration brought MCC and the high tech industry to Texas, but the biggest accomplishment was passing education reform in a special session in 1984. The economy crashed in 1986, jeopardizing the hard-won education reforms and crucial state services. Gov. White persuaded the Legislature to hike taxes in a bid to keep Texas’ future economic standing bright. It worked, but cost White re-election.

Serving as press secretary was hectic, made even more so by the birth of second son, Jon, in 1985. It was common to see months-old Jon crawling around the Governor’s Mansion and Press Office before he could walk.

After White left office, Ann decided to check with doctors about nagging health problems. She soon faced the biggest challenge of her life. Doctors diagnosed her with leukemia and said she had six months to two years to live.

Ann rejected that death sentence, joined an experimental treatment program at UT’s M. D. Anderson and now has lived a remarkable 20 years with the disease. She would not even stay home to feel sorry for herself.

In January 1987, lawmakers were desperate for new revenue and some were eyeing an Ad Tax to help fill state coffers. When TAB’s long-time Executive Director Bonner McLane died suddenly, the organization tapped Ann to take the reins.

Ann quickly realized that broadcasters – despite their strong community leadership – were unaccustomed to personally lobbying their lawmakers. And TAB could not afford the kind of high-dollar lobbying campaign typical of major public policy fights. With her legendary power of persuasion and tireless dedication, she mobilized legions of Texas broadcasters from across the state into grassroots lobbying warriors.

The Ad Tax was defeated, the first of many major wins. TAB bested the state’s major phone companies in the early 1990s over legislation allowing them to enter the video business. That defeat persuaded the phone companies to enter six weeks of negotiations with broadcasters and eventually led to the first state law creating must-carry/retransmission consent rights for television and radio stations. It set the stage for the cable industry to finally start paying stations for their programming.

Ann focused on shaping state tax policy to ensure broadcasters benefit from the same kind of tax exemptions that other industries do. She positioned TAB as a primary defender of Texas’ Open Government laws. Scores of seemingly innocuous bills that could have hurt stations were amended or scuttled at her behest.

Texas broadcasters stepped up to the federal playing field, too, as Ann fought new EEO rules hastily adopted and applied retroactively by the FCC. She helped engineer the defeat of free airtime for political candidates and preserve the tax deductibility of businesses’ advertising costs.

She is broadcasters’ fiercest advocate for enhancing the Emergency Alert System and has laid the groundwork for the media industry’s ongoing efforts to pass a Free Flow of Information Act in Texas.

For the past 20 years, Ann’s vision, fearlessness and tenacity have allowed TAB to flourish and prosper. Her accomplishments and continuing leadership will help Texas broadcasters achieve even more to ensure the industry’s continued vitality.