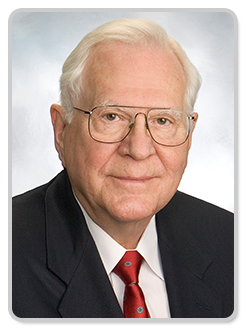 Born 93 years ago on March 2nd – Texas Independence Day –  the son of a Texas Radio broadcaster and grandson of the Texas Lt. Governor who founded The University of Texas at Austin’s journalism school, Wendell Mayes, Jr., appears to have been destined to become a Texas broadcast pioneer.

Mayes spent most of his early days in Brownwood and attended Schreiner Institute in Kerrville.

After his freshman year, he transferred to UT-Austin in 1942, but quit to enlist in the U. S. Navy for World War II.

The Navy trained him as a radio and radar technician, and he took a specialized course on the radar used on night fighter aircraft. After World War II ended, Mayes enrolled in Texas Technological College (now Texas Tech University) in Lubbock.

Majoring in Electrical Engineering, he received a Bachelor of Science degree with Honors in May 1949. That same year, he rejoined his family’s station, KBWD in Brownwood.

The Mayes family’s broadcast holdings totaled 18 radio stations at one time or another, over a period of five decades. Stations were located in Amarillo, Austin, Brownwood, Fort Worth, Midland, Snyder, Sweetwater, Victoria, Waco and Oklahoma City.

In 1973, his station KNOW in Austin received the George Foster Peabody Award, one of the most prestigious awards in broadcasting.

The award honored the station and staff for their outstanding programming, including editorials Mayes wrote and delivered.

Mayes served many terms on the TAB Board of Directors, and his fellow broadcasters elected him Chairman in 1964. TAB presented him with the Pioneer of the Year Award in 1978.

He also served on the National Association of Broadcasters’ Board of Directors from 1969-1973.

Mayes was on TAB’s committee to select a new executive director in 1987, when longtime leader Bonner McLane suddenly passed away.

Mayes was the one who told Ann Arnold, then press secretary to Governor Mark White, that the committee had selected her.

Arnold headed the association for 25 years until her death in 2012 and she often looked to Mayes as a mentor and advisor on everything from broadcasting to politics.

She always recounted the story of Mayes warning her to “watch [her] language around old East Texas broadcasters – who were none too keen on having a sassy woman run their association.”

Over the years, he and his fellow broadcasters have raised hundreds of thousands of dollars to help deserving college and university students cover tuition and expenses.

“Broadcasting is a people business. The quality of what we do is fully dependent on the quality of the people who do it,” Mayes said.

In 2001, TBEF honored him with a scholarship in his name, to be presented annually to a student at Texas Tech University.

In 2017, he made an additional contribution to TBEF out of concern about skyrocketing tuition costs at Texas colleges and universities.

The Texas Association of Broadcast Educators selected Mayes as Broadcaster of the Year in 1989. Mayes was inducted into the Texas Radio Hall of Fame in 2002.

A Lifetime of Learning, Giving Back

He went on to earn a Master of Liberal Arts degree in 2005 and a Master of Business Administration in 2006 from St. Edward’s University. Continuing his education in 2013, Mayes received a Ph.D. in Finance – when he was 89 years old – from Walden University.

In addition to all his work on the university level, Mayes is an internationally-known ambassador for the American Diabetes Association and International Diabetes Federation.

He continues to help the diabetes associations with efforts to emphasize research, special events, advocacy, education and fundraising. When Texas formed the Texas Diabetes Council in 1983, Mayes served as its first Chairman and was the first inductee into the Texas Diabetes Hall of Fame.

Mayes’ quest to make things better for the world around him is the hallmark of a life of community service. His efforts in broadcasting, education and health science are immeasurable.