You are here: Home > Convention & Trade Show > Augie Grant
Welcome, guest: Login to your account
no 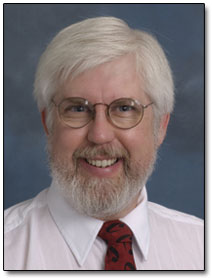 Dr. Augie Grant is a former broadcaster who now teaches at the University of South Carolina and conducts research on the telecommunications industry.

He worked for various radio and TV stations while earning his undergraduate degree from the University of Florida. Grant did everything from part time DJ work at WDVH to production and booth announcements for WUFT-TV Gainesville.

After graduating in 1977, he went to work for the Florida Farm Bureau Radio Network announcing farm prices and hosting two consumer affairs shows. Grant left radio for a short stint selling newspaper ads. Only two weeks into the job, the paper’s owner was arrested for robbing a bank.
It turns out the paper was entirely financed by bank robberies so Grant decided to stay away from newspapers and stick with broadcasting.

His work in radio, television, and corporate communications inspired him to return to the University of Florida to earn a Master’s degree in Journalism and Mass Communication. Grant moved to Los Angeles after graduation ready for his big break in television…but things didn’t go so well…
Six months passed and he decided he would rather be a broadcaster in Florida than a shoe salesman in Los Angeles.

Grant moved back to Florida in April 1982 for a job as a radio program director. One year later, he took a teaching position at Sam Houston State University and got involved with the Texas Association of Broadcast Educators.

The appeal of a career in research eventually led to doctoral studies at the Annenberg School for Communications at the University of Southern California. After completing his doctorate, Grant headed back to Texas to join the faculty at UT-Austin where he would spend the next nine years.
Grant served as the UT representative to TABE from 1989 through 1997.

During that time he served as President, Secretary, and Treasurer, as well as educational representative to the TAB Board of Directors.
Grant has become one of the most prominent academics working in the field of convergent journalism.

Grant is best known as editor of Communication Technology Update, a semi-annual review of the latest developments in consumer electronics, telephony, electronic mass media and satellite technology. The update, currently in its tenth edition, is produced in cooperation with Austin-based Technology Futures, Inc. It is used extensively in industry and has become one of the top-selling textbooks in the field of communication technology.

In 1997, Grant left Austin to found the Center for Mass Communication Research at the University of South Carolina. But Grant has never really left TAB…

He served on the TBEF Board of Directors for many years, spearheading fund-raising for new scholarships. When Past TAB Chairman Tom Reiff died, Grant suggested a gala event to raise money for a scholarship in his name. Thanks to his efforts and Texas broadcasters’ support, the foundation now awards eight annual scholarships.

Since 1994, Grant has been a consultant to the TAB, conducting a variety of research projects including the Annual Public Service Study. He even traveled back to San Antonio in 2004 to testify on behalf of Texas broadcasters’ public service efforts at the FCC’s localism hearing.

TAB salutes Grant for his years of inspired teaching, as well as his efforts to bring broadcasters and educators together.